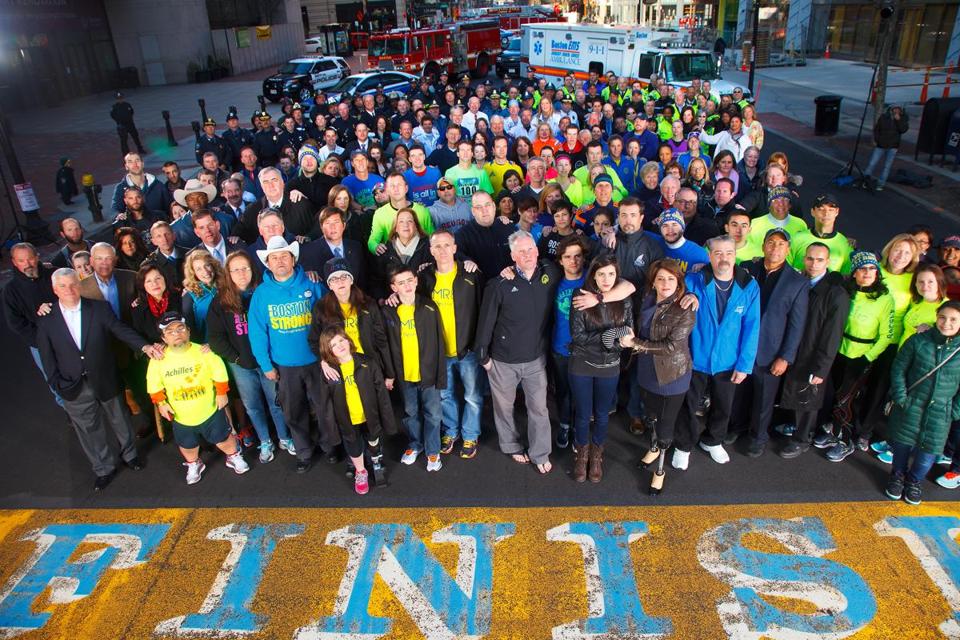 The first 30 seconds after the second blast - a photo gallery

This is, one year after, the actual state of non-FBI photo evidence from the immediate aftermath of the second blast of the Boston Marathon Bombings, without comment, for documentary purposes. Most of these photos I have already posted within other contexts, they are compiled here to focus on the area of Boylston Street in front of the Forum. The times have been determined with the help of the Fred Land video and other sources. I've added the original URL and, if available, the photographer. 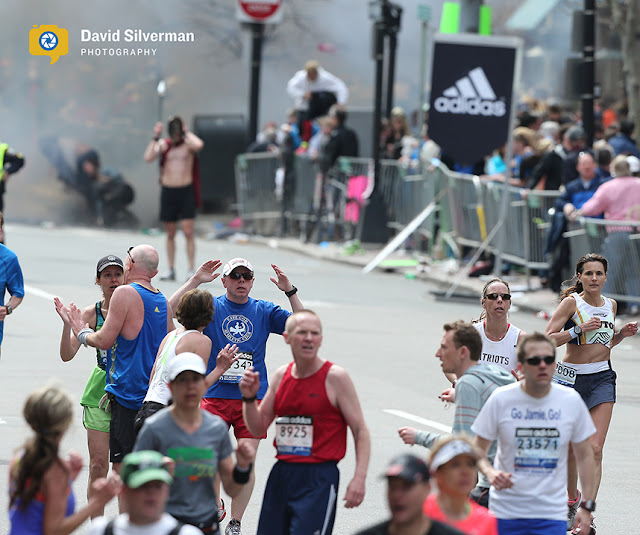 Update  4/14/14: the little stairway in the background belongs to the building beside the Apple store.


Jarrod Clowery is a potential key witness for the prosecution in the Tsarnaev trial because his various public accounts seem to confirm that the second bomb exploded near the metal barriers, not on the Forum's patio - which would indicate that Tsarnaev's bag was the bomb. I have analyzed his statements in a blog entry from August 2013 and mentioned the problems coming along with them.

In this article, I stated that the photo with Clowery sitting on the street, apparently injured and treated by two first aiders, was taken at the crossing Boylston Street/Ring Road. I based this conclusion on the zebra markings in the background which seemed to be the ones in front of the Forum.

After a closer scrutiny, I have to retract this discovery. The photo was not taken in front of Forum/Starbucks Coffee (755 Boylston Str.), but in front of the Apple Store (815 Boylston Str.). Several details in the background make this conclusion inevitable:

All of these details fit the site at the Apple Store, but not the second bomb site. Additionally, the photo with Clowery standing upright is clearly taken in front of Fidelity Investments (801 Boylston Str.) right beneath the Apple store. You can see the italic "Fi..." writing in the window, and the patterns of the pavement and the walls match the location 1-1.

Jarrod Clowery has recently launched a charity, the "Heroes Hearts Foundation". On a speech at the founding assembly, he reiterated his story: he was blown onto the street by the second bomb, stood up in bewilderment, looked around for a couple of seconds, and was compelled to sit down by two off-duty policemen who cared for him afterwards. While it is theoretically possible that all of this happened at the Forum and the scene at the Apple Store occurred a bit later, like kind of a dejà vu, he never has mentioned the Apple Store episode.

Clowery himself has authenticated the first photo (using it on his Facebook page), and he will also not deny that he's the person standing in front of Fidelity Investments. The photographer of both pictures was Kenshin Okubo. Clowery wears a grey jacket - the Boston Red Sox Fashion Therma Base Premier Jacket:

This jacket has some striking unique features:

-  a writing RED SOX on the front
-  red stripes at the elbows
-  a red stripe at the collar
-  a "red socks" logo on the left sleeve
-  a small logo on the back, below the collar

There is an individual identifiable on photos and videos of the second bomb site wearing the very same jacket, with torn pants and a striking similarity to Clowery. For convenience, I name this man "Red Sox Jacket". His actions can be reconstructed very well with the help of the footage:

7 seconds after blast: Red Sox Jacket runs away from the Forum, in the photo left (source: David Silverman) 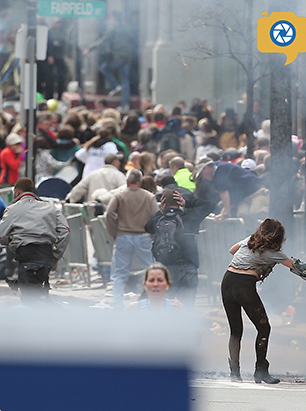 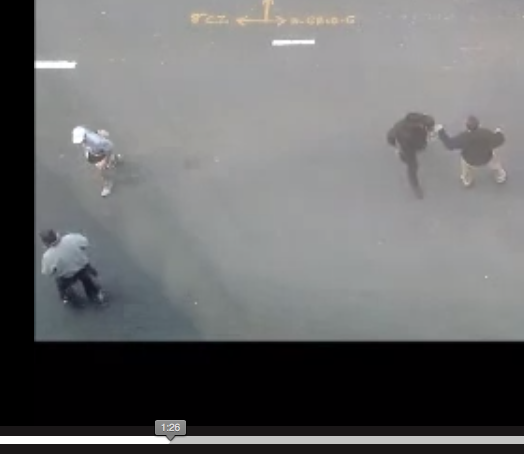 30 seconds after blast: Red Sox Jacket is on Boylston Street in front of the Mandarin Hotel looking back to the bomb site, in the photo right (source unknown) 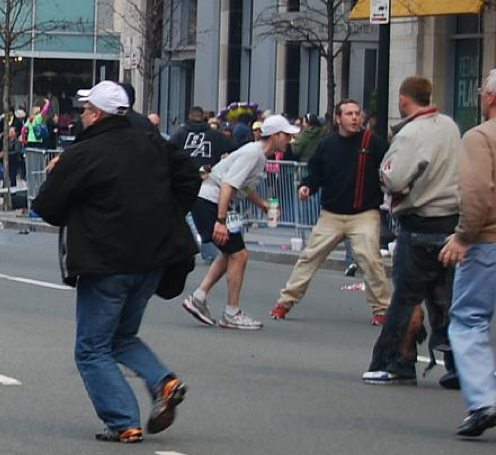 In this diagram, the black stars represent the positions of Red Sox Jacket at the respective moments: 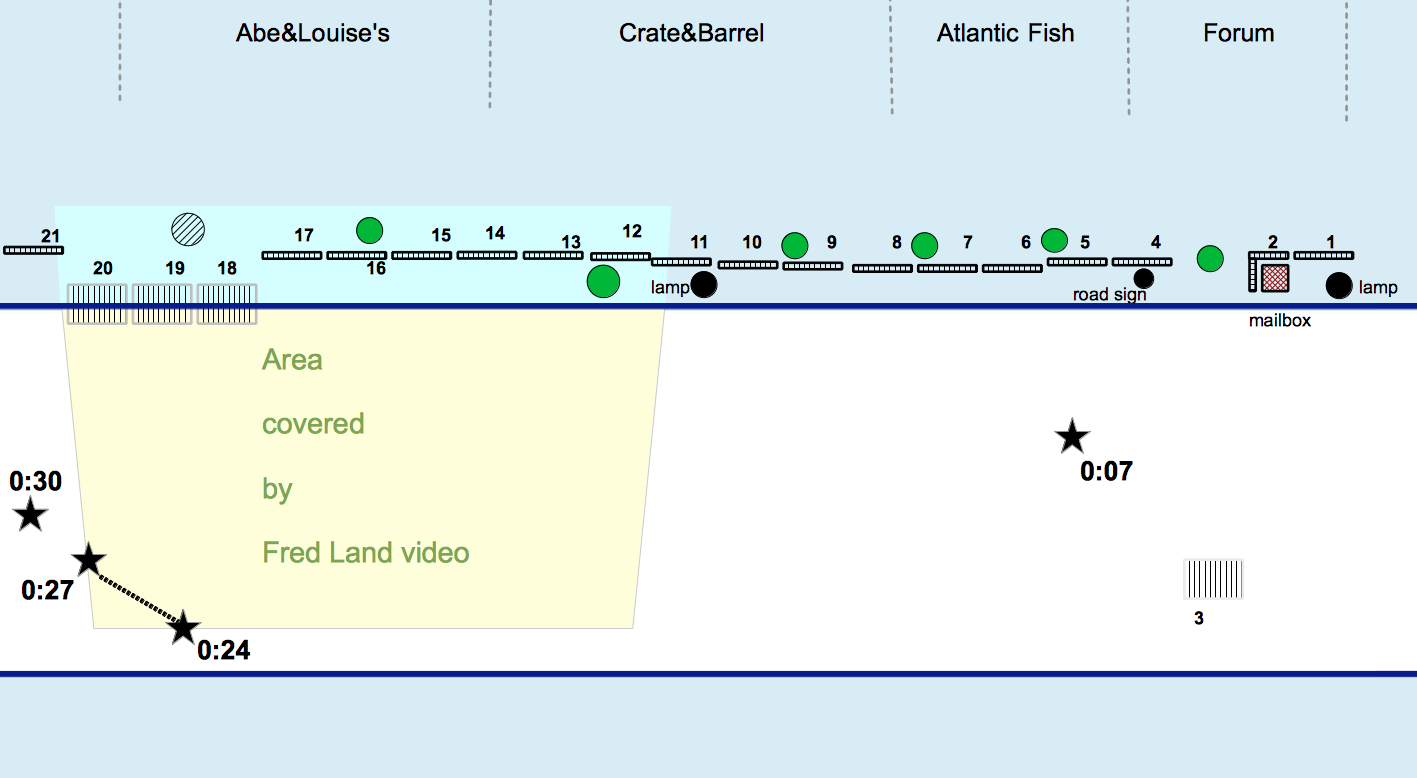 Either Jarrod Clowery is the man with the Red Sox jacket, then there are some irreconcilable discrepancies between the footage and his narrative; or it's a different person and only a remarkable coincidence, but in this case the question arises: where is Clowery on the footage of the aftermath of the second bomb? He must be somewhere.

The prosecutors have declared that they have thousands of photos and hundreds of witnesses for proving Dzhokhar Tsarnaev's guilt. In case they intend to summon Jarrod Clowery to the trial as a witness, he should be prepared for some uncomfortable questions from the defense team.