Erinn Fleming - Witness for the Defense

in the case USA versus Dzhokhar Tsarnaev

For how long will the prosecution uphold its claim that Tsarnaev was the second bomber? For how long will local media like the Boston Globe and the Boston Herald be silent about this grotesque charge against an innocent Boston citizen and leave the real perpetrator unchallenged?


Heather Abbott is one of the most prominent survivors of the Boston bombings. I have already featured two of her early statements in April 2013 as confirmation that the second bomb exploded on the patio of the Forum restaurant. Meanwhile, she has repeated that she was catapulted through the entrance door on several occasions during the anniversary and the Marathon in April 2014.

Among the eyewitnesses for the second bomb site she has an outstanding position for several reasons. First, the frequent and consistent repetition of her story to various media gives it weight und authenticity, in the sense that mistakable or flatly wrong quotes and interpretations can be excluded. Second, as I have outlined in my April 2013 blog entry and will elaborate now, she's definitely a witness for the defense, not for the prosecution, which promises an interesting trial. Third, her account is confirmed by people inside the Forum, thus multiplicating the potential witnesses for the defense. Fourth - and last not least - she's a prominent face of "Boston Strong", and with her open smile she has already won the hearts and minds of people in Boston and elsewhere, giving her immunity against any cheap attempts to discredit her.

In the appendix, there is a commented list of her statements. For our purposes (to show that she's a precious witness for the defense) it is sufficient to know that she was standing outside, waiting as the last one in a line to get into the Forum and that she was, in her own words, catapulted through the open door together with some other people. She landed on the ground of the Forum interior.

In order to narrow down where she was prior to the blast it is important to note that only the right leaf of the entrance door was open; the left one was closed. Because a few people (2, 3, 4, 5?) were waiting in front of her to get inside she must have been a few feet away from the doorway. She was definitely not on the sitting area of the patio which was filled with chairs and tables. She also was not near the planter (the border to Atlantic Fish) because this would have blown her through the open doorway in a skew angle. In this case the wall of the vestibule would have terminated her and her fellows' flights, and they would have been piled up right in the doorway, which is not supported by any statements or photographic evidence. In other words, the line of the waiting queue must have been perpendicular to the open door, and the people were catapulted inside along a perpendicular or almost perpendicular angle to it.

This results in the following diagram. With a very high probability, Heather Abbott was in the checkered area immediately before the blast. 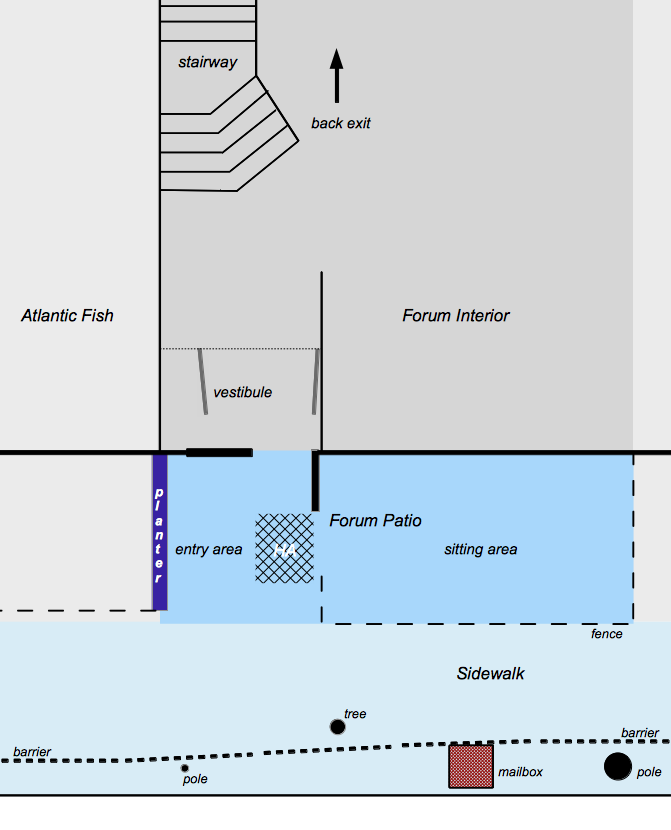 The bomb exploded right behind her, and eyewitness statements and photographic evidence leave no doubt that it exploded on the patio, not on the sidewalk. So the area where the explosive blackpack was placed can be narrowed down quite well (checkered): 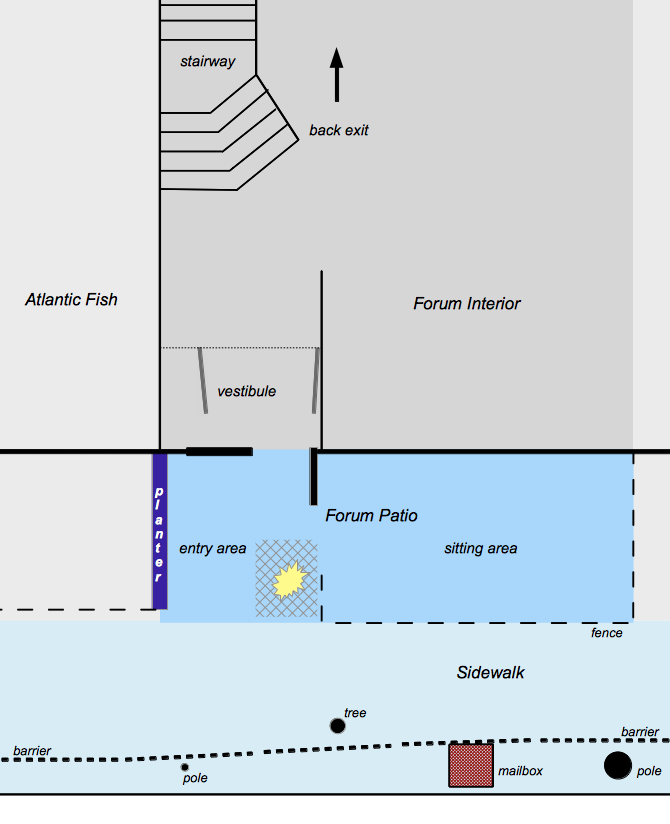 According to the criminal complaint, Dzhokhar Tsarnaev dropped his bag at the metal barriers. This is so far away from the contemplable epicenter of the bomb that it makes Heather Abbott a key witness for the defense.

Abbott saw smoke swirling and people rushing into the bar — but she didn’t make it inside. The second bomb exploded, and a piece of shrapnel hit her foot. “Who would help me now?” she remembers thinking. But a woman came to Abbott’s aid, dragging her inside the bar.

This remarkable article is the only one which says that Abbott was not thrown through the door. But as we will see, it contradicts every other statement she has made since. Additionally, the story of the woman who "dragged her inside the bar" doesn't appear anywhere else, neither do the "people rushing into the bar". Apparently these remarks are factually wrong dramatizations. The Washington Post itself published a new article on her recovery two weeks later, correcting the earlier story, and this time she is quoted directly, not indirectly as above:

Abbott said she was in line to get into Forum, a bar near the finish line, when the second of two bombs went off. “I heard it go off, and the next thing I knew I was on the ground inside of Forum,” she said. “It blew me in. And my foot was on fire. And I was afraid to look at it.”

It is an interesting question how the author of the first article, Suzy Khimm, may have arrived at her erroneous reporting. The speculation ought to be allowed that it was part of what I call the "mailbox spin", i.e. the attempts to make reports of the second blast and its aftermath compatible to the claim that the bomb exploded near the mailbox (the place where Tsarnaev presumably left his bag). This phenomenon can also be observed at many other big news outlets: CNN, New York Times, and more - and at one time, they will hopefully be held accountable for these misreportings.

Abbott was scrambling to get off the sidewalk when the force of a second blast blew her through the restaurant doorway. After she'd regained her senses, she tried to stand, but her left foot felt "as if it were on fire." Unable to find her friends in the smoke and confusion, she called out to the panicked crowd.

She was injured by the second bomb, which went off in front of the Forum restaurant on Boylston Street. She was waiting in line with friends to get into the bar after taking in a Red Sox game, which is a Patriot's Day tradition for the Newport, R.I., resident. She and her friends had come up by train from Providence. After hearing the first, nearby explosion, Ms. Abbott immediately thought it was a terrorist attack—something she said leaves her leery of returning to the marathon or other crowded venues again. The next bomb went off quickly. Ms. Abbott, last in line among her friends, was on the floor as people scrambled to the back of the bar.

When we got there, we were standing in line outside waiting to get in - the bouncer was checking people’s IDs and I was the last of the three of us in line. As we were standing there a loud noise went off and I remember turning around and looking and seeing smoke and seeing people screaming and it immediately reminded me of 9-11, something I had seen on tv. It just all happened so quickly that when I turned around, the second blast had already happened and it blew a bunch of us into the bar. I suppose it hit me because I was the last one. I was on the ground. Everybody was running to the back of the bar to the exit. I felt like my foot was on fire. I knew I couldn’t stand up.

Note that the second blast "blew a bunch of us into the bar" - i.e. not only Heather Abbott, but also the people in front of her.

“Shortly after I got catapulted into the restaurant, kind of coming to on the ground,” said Abbott. “It was a little bit of a strange feeling coming in for the first time. I’m here with the people I came with the first time and the people who rescued me and I’m looking forward to leaving with a much different memory."


In the week between the anniversary and the 2014 Marathon, Abbott gave several interviews, sometimes together with Matt and Erin Chatham. The couple was at a charity event of the Joe Andruzzi foundation on the second floor of the Forum, rushed down after the blast and spotted her when she was lying helplessly on the ground. They carried her outside and stayed with her for the next minutes. Their statement proves Suzy Khimm's report about Abbott being "dragged inside" definitely wrong.

Heather had been about to walk into the Forum when she heard the first bomb go off. “I turned in the direction of it and saw smoke and people kind of frantic,” says Heather. “Just seconds later, the second bomb exploded right next to me.” Since it was a spring day, the restaurant had its doors open—and the force of the bomb catapulted Heather inside the restaurant.

“When I came to on the ground, I realized my foot felt like it was on fire,” she says. “I was in a lot of pain, and people were running away in the direction of the street through the back entrance of the restaurant.”

When Heather tried to get up, she couldn’t—so she yelled for help. Erin Chatham, wife of former Patriots linebacker Matt Chatham, heard Heather’s pleas and got her husband to carry Heather out of the restaurant, where she was taken to the hospital.

The two also remembered the moment that brought them together. Abbott had just come from the Red Sox games and was about to walk into the Forum restaurant when the first explosion occurred. “It happened so quickly, before I could even say anything, I heard the second explosion right next to me. The force from it actually pushed me inside of the restaurant and onto the ground.”

Matt and Erin were in the restaurant. Erin was the one who heard Heather pleading for help. Heather said, “I was really lucky she stopped to help me because people were literally running by me.”

Erin explained, “I spotted Heather trying to get up... and she was struggling to get up and that’s when I realized she had a bad injury.” Matt added, “My wife essentially talked me into scooping her up and heading out the back. It was my wife tugging and showing me Heather, who really needed special attention, that’s what brought us together.”


"The next thing I knew I had been catapulted through the open door onto the ground of the restaurant by the force of the bomb."

"I was struck by shrapnel and I was catapulted through the front door of the restaurant, and found myself on the ground there."