Update 10/5/2013: "A spokesman for the family said he was unable to confirm the identities of those in the marathon image or provide an update for Jane's condition given she is under a privacy order." Daily Mail, 4/23/2013

Update 9/21/2013: The  Fred Land video  eradicates the last doubts that the photo is fabricated. The blue runner must have passed the area covered by the video seconds before the second blast. But he is not there. The photo is a fake.

The violent death of Martin Richard, Lu Lingzi and Krystle Campbell has shocked the world, and the world will be reminded of it again in the coming trial against Dzhokhar Tsarnaev. The indictment accuses him of murdering Martin Richard and Lu Lingzi because they were allegedly killed by the Forum bomb:

Apart from the evidence that Tsarnaev's bag was not the second bomb however, presented in my previous blog entries, there are also serious doubts that the two deceased were victims of the Forum bomb at all. The evidence is murky, as I will show now for the case of Martin Richard.

Martin was killed in the first explosion as he waited to give his father a hug at the finishing line. His sister and mother were also injured.

Before the explosions, Martin gave his dad Bill Richard a hug at the finish line. Sadly, when Martin ran back to his mother, the first bomb exploded and killed him. Reports claims that his Martin’s mother was seriously injured — she underwent surgery for an injury on her brain on April 15, and Jane lost her leg.

And here's an unambigous statement of firefighter Ed Kelly, interviewed by the Boston Globe's Kevin Cullen:

Their gruff lecture on fire safety and common sense was cut short when the first bomb exploded around the corner. “I know what a bomb sounds like,” he said. “We tore around the corner thinking we were going to find a fire. But there was no fire.”

Instead there were dozens of people spilled on the sidewalk. The firefighters worried about secondary bombs and biological weapons. But they dove into their work. “The first person I encountered was a woman. The bone was sticking out of her leg. Four inches in width, 10 inches in length. The femoral blood was a dark, dark red.”

A 12-year department veteran from Dorchester was right next to him, working through the victims in front of Marathon Sports. He saw a guy he knew from the neighborhood, Bill Richard. “I can’t find Denise,” Richard cried, referring to his wife.

The Richard family had been caught in the blast as they watched runners pass the finish line. Bill Richard and his son Henry avoided serious injury. But Denise Richard was hit in the head with shrapnel, and her 6-year-old daughter Janey lost part of her leg. Eight-year-old Martin Richard caught the full force of the explosion, and when the firefighter looked down at him, “I knew Marty was gone.”

Marty Richard was a third-grade classmate of the firefighter’s daughter. In fact, almost everyone on Engine 7 knew the Richards; the lieutenant’s kid was a classmate of one of the Richard kids.

All of this indicates that the Richard family was at the first bomb site. However, here's a different story:

Representative Stephen Lynch of Massachusetts spoke on the story on Tuesday's edition of MSNBC's Morning Joe, which differs from the accounts that state that Martin's father was running during the marathon: "The dad is a runner, but he wasn't running yesterday. They were there to support some of their friends who were running. The kids were all up on the barrier. They were all focused forward and the blast came from the back and the side."

While the last quote makes no mention of the whereabouts of the Richard family, the next one (quoting the same witness) explicitly states that the family was hurt by the second bomb:

Lynch said the family was attempting to get over the race barriers and into the street when the second blast occurred, killing Martin. Bill Richard and Henry Richard were not seriously injured, but doctors did remove ball bearings from Bill Richard's leg, Lynch said.

There are some problems with this story, however. According to the complaint against Tsarnaev, there were no people climbing over the barriers at the second bomb site after the first explosion. All of them looked in the direction to the first blast - with the exception of Tsarnaev:

Virtually every head turns east (towards the finish line) and stares in that direction, in apparent bewilderedness and alarm. Bomber Two, virtually alone among the individuals in front of the restaurant, remains calm.

The most striking "proof" for many that Martin was a victim of the Forum bomb is certainly this photo:

Tsarnaev's head is visible in the background and there is something like a bag at the metal barrier. This photo, whose origin is murky, appeared in several British newspapers at first and was quickly acclaimed as proof that Tsarnaev had just left his bomb bag and was about to flee the scene.

However, it is easy to see that the photo is a fake. Again a quote from the initial complaint:

He walks away without his knapsack, having left it on the ground where he was standing. Approximately 10 seconds later, an explosion occurs in the location where Bomber 2 had placed his knapsack.

Assumed the photo is genuine, it has to have been shot after the first explosion because Tsarnaev didn't walk off prior to it. However, not one single person turns his head toward the finish line. All of them are in good mood and cheering the runners. This is not only utterly implausible, it is also contradicted by the complaint which clearly states that "virtually every head stared to the finish line in apparent bewilderedness and alarm."

Additionally, the photos shot in the seconds after the blast don't verify that Martin had been standing on a metal barrier: the very same barrier was blown across the street, but Martin and Jane, his sister, are nowhere to see, neither at the barrier, nor somewhere on the street. Not one of the girls/women standing at the barrier is detectable in the post-explosion photos. And vice versa, noone of the injured people in the post-explosion photos is detectable in the alleged pre-explosion photo. 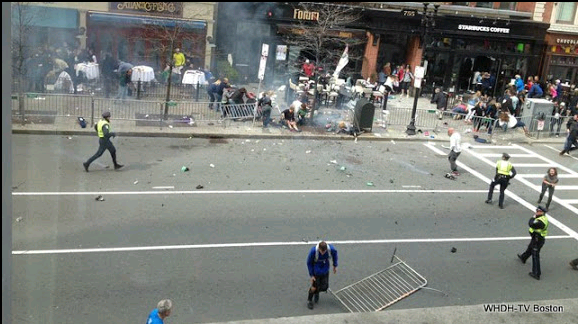 The photo with Martin Richard and Dzhokhar Tsarnaev is not genuine. It is a fake, fabricated and dispersed in the obvious intention to paint Tsarnaev as Martin's murderer and create dull and ill-advised emotions. It fits into the already known pattern to make Dzhokhar Tsarnaev responsible for a crime he obviously didn't commit.