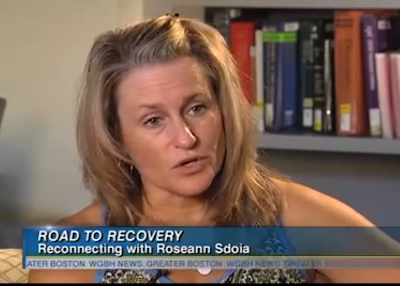 In my preceding blog entry I've argued that the epicenter of the Forum bomb can easily and reliably be determined by comparing pre-blast photo/video footage with post-blast footage. While some post-blast footage has found its way to the public - I've presented it in several earlier postings -, the crucial pre-blast footage, which is basically the videotape showing Dzhokhar Tsarnaev dropping his bag and the subsequent explosion, is still a secret and only known to the FBI, the Boston police, the prosecution - and, notably, the defense.

Coincidentally, the local TV station WGBH has recently aired a report on Roseann Sdoia, who is one of the most affected victims of the bombings. She lost her right leg. The report is an update on her condition, including an early interview conducted in May. It reanimates the story that the bomb's epicenter was near the mailbox by showing an obsolete picture with the spotlighted mailbox and an underlying comment that locates Sdoia at the mailbox before the blast:

"She had ordered a drink at at the bar at the Forum. Then she got a text that her friends were approaching the finish line. She went out and stood right near this mailbox. She heard the first explosion and thought it was odd. Then the second went off right next to her." 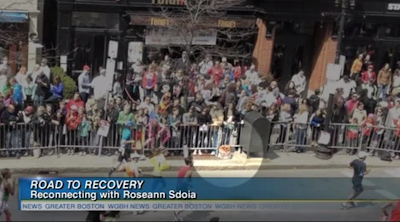 It is not clear from the report if the mailbox information comes from Sdoia herself or has been added arbitrarily by the WGBH editors. The original interview clarifies that. It has been published on May 7th in two different versions. One version covers the entire interview while the other one has been redacted and shortened. I've transcribed the crucial excerpt. The text in the bold font is covered by both versions; the text in the normal font is missing in the redacted version.

ROSEANN SDOIA: We walked over Boylston Street and went to one of the local bars there that we've gone to again for years, knowing that different friends were going to meet up there later. And we got notification that one of your friends was close to coming down Boylston Street, so we ended up going out to watch the race. We were standing along the road and just cheering on the runners and waiting. And it was just really weird. Other friends had shown up at that point I was before with my girlfriends. And because I'm short  - there was a mailbox there - and I moved to the right of the mailbox so that I could be you know one of the first ones to see my friend Jan coming down. And my friend Megan actually even asked to stand next to me because there was a gentleman next to me. She said if she might kind of squeeze in here to see her friend. He said that he was waiting for his fiancee to come down the road so my friend Megan took a step back. And within a couple of minutes the first bomb went off. It was just really strange because, again, I've done that for so long. They've never had guns or cannons or you know something to salute the runners. So I thought it was strange. But it all happened so quickly. Some guy next to me yelled "the building went down" or "beware of the smoke". And I looked... I stood on the railing to look down and saw the smoke coming up. And a gentleman told us to get to the middle of the street, and there were the barriers. I just remember everybody was kind of trying to get over, get out or just kind of run. That was all like so quick. There was just a "pop, pop". And it was literally at my feet, it just... I thought it was like more nails being kind of thrown in. But just because I was guessing... I thought it hit the ground or came from the ground. And then I just remember kind of not knowing what was going on.

INTERVIEWER: So the second one was what hit you.

ROSEANN SDOIA: Exactly, it was the second one.


As it turns out, Roseann Sdoia is indeed the origin of the sensible mailbox information, which has been omitted in the redacted interview version. With all respect to Mrs. Sdoia, but if she wanted to say that she was standing next to the mailbox and the bomb exploded right next to her, there must be something wrong with her recollections - or she has undergone some kind of pressure from whoever. The geographical conditions at the Forum crime scene and the photographic evidence are simply not compatible with her account.

I've sketched my line of argumentation for this in the appendix. It should be noted that regardless if my objections are appropriate or not, the defense team doesn't have to bother about the problem. They do have the video footage from prior to the blast, so they do know the exact locations of Roseann Sdoia and Dzhokhar Tsarnaev's bag. And because the prosecutors don't list Sdoia as an eyewitness in their motions, her account will probably not play a role in the trial. It does shed some light however onto the massive disinformation campaign that was undertaken to "move" the actual location of the epicenter - the patio - to a ficticious one - the mailbox - in order to make Tsarnaev a patsy.

The first diagram is based on Sdoia's descriptions and depicts the situation at the mailbox before the first blast: she said that she (RS) moved to the right of the mailbox; she said also that the bomb exploded "literally at my feet". But because Dzhokhar Tsarnaev (DT) carried his bag over his right shoulder, he must have been between Sdoia and his bag after he dropped it. The locations of her friend Megan (M) and the "gentleman" (G) accrue from Sdoia's interview.

PRE BLAST
The next two photos show the crime scene about 20 seconds after the blast.

The post-blast diagram is based on these photos. The red ovals represent Sdoia (RS) and a man lying on the ground (E). Barrier 2 was bent by the force of the blast, barrier 3 was blown away. 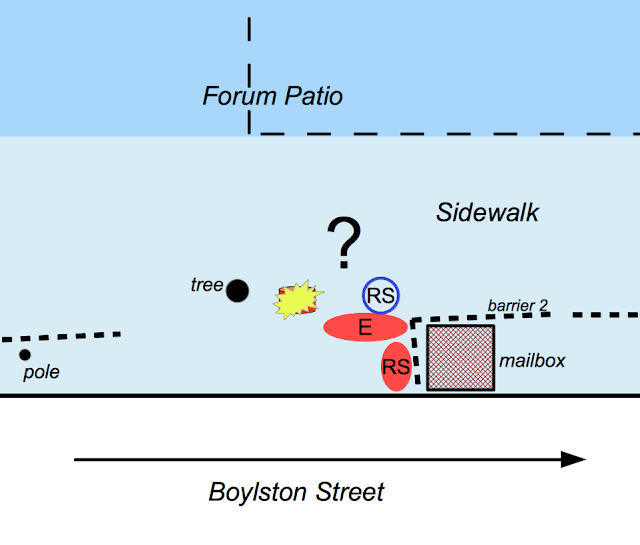 The diagram suffers from at least three physical impossibilities:

1 - it is impossible that Roseann Sdoia ended up at the curb, given that the blast must have hit her from the right side.

2 - it is impossible that barrier 2 was bent by the blast because the impact occurred in a smooth angle in relation to the the barrier's orientation.

3 - it is entirely unexplainable how victim E managed to arrive between the blast's epicenter and Roseann Sdoia and where he came from.

Corollary: the array of persons in the pre-blast diagram does not reflect the real situation at the Forum in the seconds before the bomb exploded.