How to find out the epicenter of a bomb blast: a lesson for the Boston FBI

The prosecution's response to Dzhokhar Tsarnaev's request for more time regarding the death penalty recommendation has recently been published. For the first time, the public has now the opportunity to get a glimpse into the prosecutors' cards when it comes to their evidence that Tsarnaev's backpack was the Forum bomb. And as matters stand, their cards are hardly worth a bet.

The only incriminating evidence the prosecution has submitted to the defense with regards to the Marathon bombing - at least the only one cited - is the surveillance video which shows Tsarnaev staying in front of the Forum for four minutes, dropping his bag and abandoning it in the seconds between the first and the second explosion. The prosecution doesn't cite any eyewitnesses or physical evidence confirming that the backpack was the epicenter of the bomb.

So because the video is the only established evidence against Tsarnaev, in order to be useful for the death penalty it must show not only that he drops his backpack - but also that this very same backpack causes the subsequent blast. A survey of statements from officials raises serious doubts that the second condition is fulfilled. DesLauriers does not say that he factually saw the backpack exploding in the video. He dodges. In the following Q/A session, he admits that it's only his "believe" that Tsarnaev's backpack was "the device".

Question: Are both suspects seen planting these devices at the finish line of the Boston Marathon?
Rick DesLauriers: No, the only one who was observed planting what we believe to be the device is suspect number 2 with the white cap. 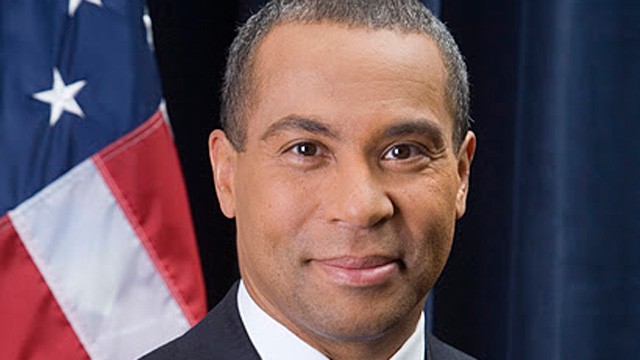 2 - Massachusetts Governor Deval Patrick, who has not even seen the video himself:

Patrick describes how Tsarnaev took his backpack off, put it down and then moved away "in time". What Patrick does not say is that the backpack exploded.

He walks away without his knapsack, having left it on the ground where he had been standing. Approximately 10 seconds later, an explosion occurs in the location where Bomber two had placed his knapsack.

Genck avoids simply saying "approximately 10 seconds later, the knapsack explodes" and chooses a pretty hazy wording. Why? His subsequent remarks give a hint:

I have observed video and photographic footage of the location where the second explosion occurred from a number of viewpoints and angels, including from directly across the street. I can discern nothing in that location in the period before the explosion that might have caused that explosion, other than Bomber Two's knapsack.

It is apparent that the last remarks are added only because the footage of the moment of the explosion itself doesn't allow for an exact determination of the epicenter. This is not surprising at all because the flash and the concussion caused by the blast may have made such an accurate determination impossible.


So it turns out that the FBI has not even bothered to verify the bomb's hot spot by other means. The suspicious behavior of Tsarnaev was enough proof for them that his backpack contained the deadly load.

It is no rocket science however to determine the epicenter of a bomb which was planted inmidst a crowd - provided there is video or photographic footage before and after the explosion. A simple model shows how it works. Assumed we have two persons, A and B, who were displaced by the force of a bomb explosion. The blue circles represent their respective locations before the blast, the red circles thereafter. 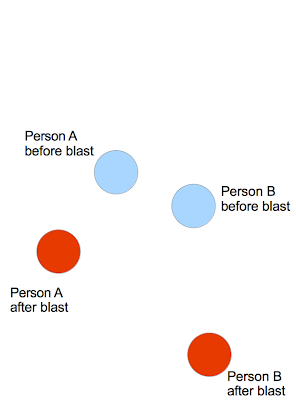 The epicenter can - with a certain unsharpness of course - simply determined by connecting A's former and later location with a line and doing the same with B. The intersection point of the two lines is the presumable epicenter. 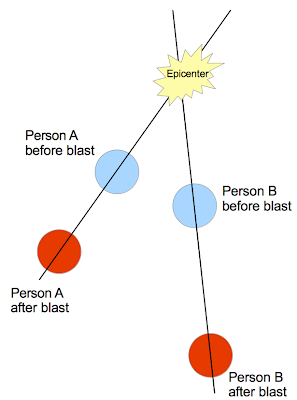 This principle can be applicated to the Forum crime scene. The photo was shot 18 seconds after the second blast. Beside the mailbox, there is a man lying on the ground and a woman at the bent barrier (in part covered by the policeman), both of them heavily wounded and obviously displaced by the bomb.


The following diagram illustrates the situation, neglecting all other people around them. The man is represented by the D oval, the woman by the E oval: 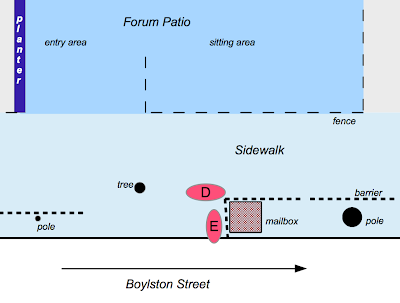 Unfortunately, there are no photos or videos from the crime scene immediately before the explosion available to the public (the photo allegedly showing Dzhokhar Tsarnaev near Martin Richard is a fake, as I've already shown). So let's assume Mr. D and Mrs. E were standing in the middle of the sidewalk prior to the blast. It is impossible under this hypothesis that Tsarnaev's backpack was the bomb, because he dropped it near the metal barrier, i.e. closer to the street - according to the prosecution and the surveillance video. The next diagram illustrates this paradox, with the blue circles indicating the hypothetical pre-blast locations of D and E. 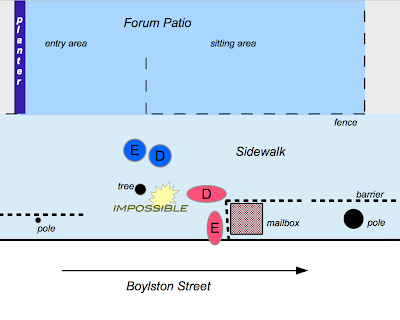 With the simple method described above it is possible to determine that the epicenter was - under this hypothesis - on the patio: 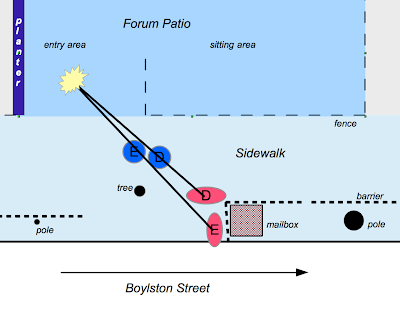 To stress it again, the locations of D and E prior to the blast are hypothetical, because I'm not in the possession of photos or videos from immediately before the blast. But the FBI is, and they have certainly footage from the immediate aftermath of the blast, too. The FBI and the prosecution don't need to "believe" (DesLauriers) that Tsarnaev's bag was the epicenter of the bomb - they could have found out by simply matching the pre-blast footage with the post-blast footage. And they should have done it before accusing an apparently innocent young man of planting a cruel and deadly nail bomb.

So why didn't the FBI check the footage to determine the epicenter?