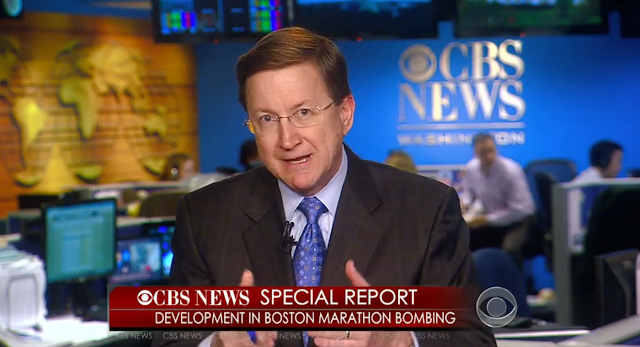 Update 12/10/2013: I added the transcript of another CBS News clip with Bob Orr to the appendix, aired at about 3:38 p.m. on April 17th. Orr reports that investigators were matching cell phone logs with images from a young white man with a white baseball cap. The images were taken from the Lord & Taylor video and processed by facial recognition software - but the suspect was not yet identified and not yet called a suspect.

For a better understanding, the reader is advised to read my preceding blog entry at first in case he doesn't know it already.

This CBS News webpage from April 17th comprises a video clip and a text. Both of them clearly refer to Dzhokhar Tsarnaev while he's standing in front of the Forum, makes his phone call, and moves away before the explosion, just as it is described in the criminal complaint. The TV clip was aired at about 2:40 p.m., with Bob Orr reporting a "man with a white baseball cap backwards" to anchorman Scott Pelley; the text is dated 6:45 p.m. and adds a comment by CBS's "special FBI consultant" John Miller. A transcript of the video snippet is in the appendix.

The earlier "arrested suspect" story, primarily but way not exclusively promoted by John King of CNN, was just in meltdown when Orr broke the new information. The crucial question is now of course whether the man reported by Orr (i.e. Tsarnaev) is identical to the individual reported by King.

At first it is important to note that Tsarnaev was not firmly considered a suspect by CBS's sources. Orr himself delivers no assessment, but his dialog partner Pelley carefully outlines the FBI's approach: Tsarnaev was "a person they want to speak with", "either a witness or potentially a suspect". How did Pelley achieve these informations? Certainly it was Orr who told him about the development and the status of Tsarnaev before the program started.

There are many additional points why it's impossible that Tsarnaev is King's suspect:

- CNN reported a dark skinned male, but Tsarnaev's skin is not dark, and CBS described him here explicitly as a "white male".

- CNN reported that the suspect planted a black bag at the bomb site, but Tsarnaev's bag was light-colored; a fact not changed at all by CBS also mentioning a black backpack. This error was probably induced by the inflationary usage of the term "black backpack" in the hours before.

- CNN excitedly reported a big breakthrough; but according to CBS, the FBI regarded Tsarnaev only as a person to speak with, a witness, or a potential suspect at most. These attributes hardly constitute an exciting breakthrough.

- CNN emphasized the outstanding role of the Lord & Taylor surveillance video and the enhancement techniques applied to it, enabling a clear facial recognition of the suspect; CBS concentrated solely on the evaluation of the cell phone call logs.

- CNN reported the arrest of the suspect; but Tsarnaev was not arrested on that day. 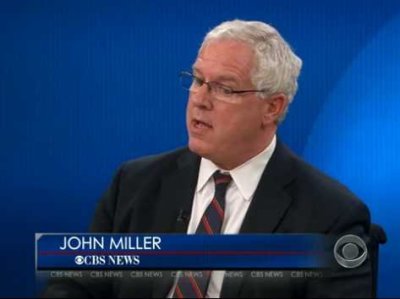 John Miller's comment in the text part of the link is more food for thought:


CBS News senior correspondent John Miller said that the big case Wednesday was whether to make the case to release that photo and go out and say this is the person who is being sought or to hold that back.

"It's been a tough call," said Miller. "For investigators, there's always a difficult choice because if the person doesn't know you're looking for him, he may stay in place, you may catch up to him. If he does know you're looking for him, he may run. On the other hand, if you don't get him, it's always great to enlist 20 million or so more eyes in the public who may be able to give you a location right away. That's not going to happen tonight anymore. It was going to happen earlier -- they've rethought that. It may happen with the release of that picture tomorrow. They're reassessing."

At first, Miller abandons the caution of Pelley and Orr; for him, Tsarnaev is definitely no witness, but a suspect. Then he explains at length why the FBI has not released a photo of the "person": because he may be warned and run away. Miller apparently doesn't realize that the leaked details about the person (white baseball cap backwards etc.) were too vague for the "20 million public eyes" to identify him, but easily sufficient for the person himself to recognize that he was the one the investigators were looking for. In other words, it was extremely stupid and a lose-lose decision to release vague verbal information about a wanted person instead of a photo.

So what does Miller try to achieve with these ill-considered remarks? They look like an attempt to explain the information clutter on April 17th through the alleged "difficult choice" between releasing a photo and holding it back. But as investigators have obviously made the worst choice at all, i.e. releasing vague verbal information instead of photos, this explanation requires extremely stupid investigators and is therefore extremely unlikely.
Miller's real intention seems to be to downplay the damaging early reports about the dark-skinned suspect by identifying him with Tsarnaev: the public is told that the (alleged) confusion at CNN and Boston Globe arose only because investigators could not agree on how to handle the case. Again Miller outs himself as a gatekeeper for the FBI.

SCOTT PELLEY: There has been a development in the Boston Marathon bombing. Police and FBI investigators have identified at least one person that they want to speak with, a person that was identified on surveillance camera video and was apparently either a witness or potentially a suspect in the bombing. Our Bob Orr has been talking to his sources in Washington and can give us more information about how this person was identified and maybe located – Bob?

BOB ORR: Scott, we have quite a bit of information actually, and they have done lot of police work in the last 24 hours to get us to this point, but essentially here's what I understand: at the site of what became the second explosion surveillance pictures and tape captured the image of a man standing there with a black backpack. On the tape – according to my sources – the man can be seen placing the backpack on the ground and he's on a cell phone call at the time. He's described as wearing a black jacket, a grey hoodie, and has a white baseball cap on backwards. What's interesting is while he's on the phone, I'm told, the explosion takes place at the finish line, down the race course. As soon as that blast went off this man then - according to my sources - can be seen leaving that area in kind of just mingling back into the crowd.

Now what they did is – they realized what the time frame was when the cell phone call was made. So investigators have done the basic police work, they've gone back through all of the cell phone information from that time period specifically to identify potential call users and ID's, and of course then they have taken the pictures and tried to match all that up in kind of a triangulated way to zero in on the suspect. I will tell you the sources are very encouraged by these developments.Very encouraged that perhaps they're on to a very good lead here, Scott.

PELLEY: There has to be a news conference by the FBI in Boston later this afternoon, Bob, it has been slipping all day and we've been wondering why the news conference was originally supposed to be at two o'clock, then it became four o'clock, it became five o'clock and we began to wonder whether there weren't going to be significant developments in this case as the news conference was pushed back farther and farther. Bob, using this cellphone information, what kind of things would they be able to determine typically?

ORR: Well my understanding is what they did here, Scott, was they knew the time frame from the surveillance tape as to when this man was on the cell phone. So they went back and pulled all the information from the surrounding cell towers and went through the call logs to try to determine who may have made calls. There are user informations, subscriber informations connected to these phone numbers. And that's how they learned about it, Scott.

PELLEY: Bob, thank you very much. Could be a significant break in the Boston Marathon bombing case.

BOB ORR: Investigators will tell you they are making solid progress in the hunt for the Boston bomber or bombers. Surveillance pictures and cell phone records may help the FBI close in on at least one possibe suspect.

Sources say investigators are trying to identify a person described as a young white man who is standing in the crowd near the scene of the second bombing just before the device explodes. A surveillance camera at a nearby Lord&Taylor department store captured images of the man who is carrying a backpack and talking on a cell phone.

Sources say he was wearing a black jacket, a gray hoodie and a white baseball cap which was backwards on his head. Investigators say the man, who seemed to be alone, put the backpack on the ground. Then, when the first explosion occurred at the finish line about a hundred yards down Boylston Street, he took off. Just a few seconds later, the second bomb exploded near where the man had been standing.

Investigators now are going through cell phone logs to determine who made calls from that location near the time of the explosions. Sources say the FBI is working with a list of names of cell phone owners and attempting to match one of those to the unknown man on the surveillance tape. Sources say forensic experts will attempt to use facial recognition software and compare the images from the surveillance camera to photo ID's connected to known cell phone users.

Now officials say so far they have not identified that mystery man and are not yet calling
him a suspect, but this is clearly a strong lead, Scott, in what has become a very tough investigation.