The magic bomb of the Boston Marathon 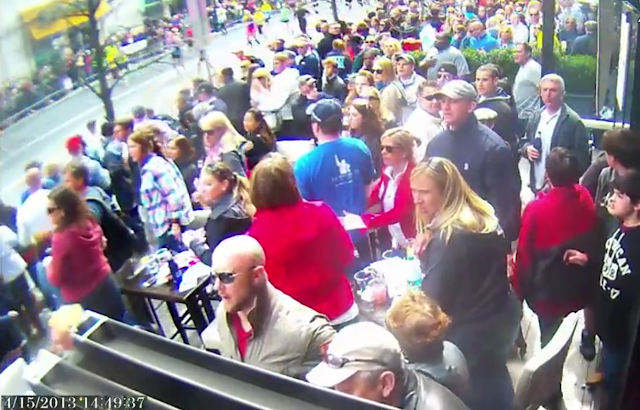 The term magic bullet has gained iconic status within the context of the assassination of John F. Kennedy. It is meant to describe the physical impossibility that one single bullet permeated both the bodies of Kennedy and Governor John Connally sitting in front of him, as it has been claimed by the Warren Commission and advocates of the official version of the JFK murder for decades. The official version of the second bomb at Boston Marathon comes up with physical impossibilites that make the JFK magic bullet look like a trick for rookies. It doesn't need an explosive expert to recognize this. There are only two simple rules to understand:

1  In general - and the pressure cookers of Boston are no exception - a bomb emits a radially unfolding pressure wave. This means that everything that is hit by the pressure wave is blown away straight into the same direction. It is not possible that it is blown away in a skew angle, as it happens when a billiard ball hits another one off-center.

2  The force of the pressure wave diminishes continuously the more it expands. This means that if two items are located in the same direction in relation to the bomb, the nearer item is hit stronger and subsequently blown away a bigger distance than the one further afar.

During the Tsarnaev trial the "official" epicenter has finally been determined with the help of the official Forum video: it was beside the tree, one or two feet away in direction Atlantic Fish. The video provides us also with the locations of the victims immediately before the blast (the above still is taken 1/10 seconds before). Unfortunately, it stops right after the explosion, so the locations of the victims after the blast have to be determined by other means, for example publicly available footage or witness statements. 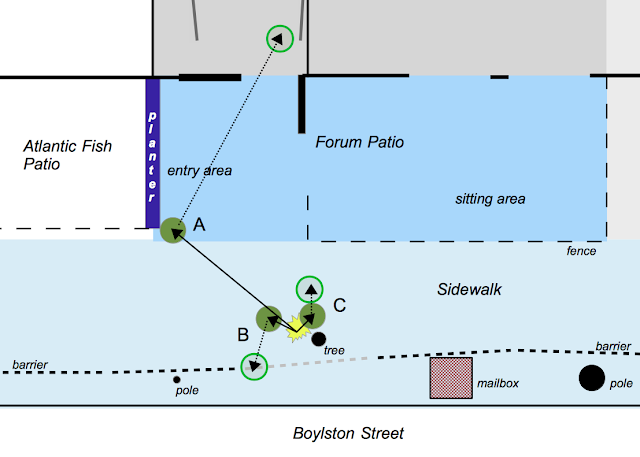 The diagram demonstrates the magic character of the bomb. It sketches its impact on three persons A, B, and C. They belong to the hardest-hit victims of the Boston Marathon bombing (it is not necessary to expose their identity here). The green circles represent their respective locations before the blast, the hollow circles after the blast. The continuous arrows represent the pressure wave hitting the victims, the dashed arrows show how they were displaced by it.

The diagram illustrates a number of physical miracles.

The first three miracles are that all of them were blown away in a skew angle. This is - approximately - for A 100 degrees, for B 90 degrees and for C 135 degrees, far away from the 180 degrees which one would expect for an ordinary bomb.

Another miracle is that B and C were blown off only a little distance, despite standing directly by the bomb.

The last - and biggest - miracle is that A was 12 feet away from the bomb, but blown away a whopping 15 feet - in a skew angle! This is all the more stunning as A was protected by some people in between (who are not depicted in the diagram).

This miracle cluster easily tops the JFK magic bullet, it is therefore justified to name the Forum bomb a magic bomb. "Magic" is of course just an euphemism for "impossible". Obviously either the assumed pre-blast locations must be wrong, or the post-blast locations.

The only source for the pre-blast locations of A, B and C is the official Forum video, i.e. the above still. Lacking any verifying footage, this doesn't make the Forum video look good and throws its authenticity into doubt. The hints are mounting that the Forum video - which is the primary evidence for Dzhokhar Tsarnaev's bag being the second bomb after all - is manipulated.