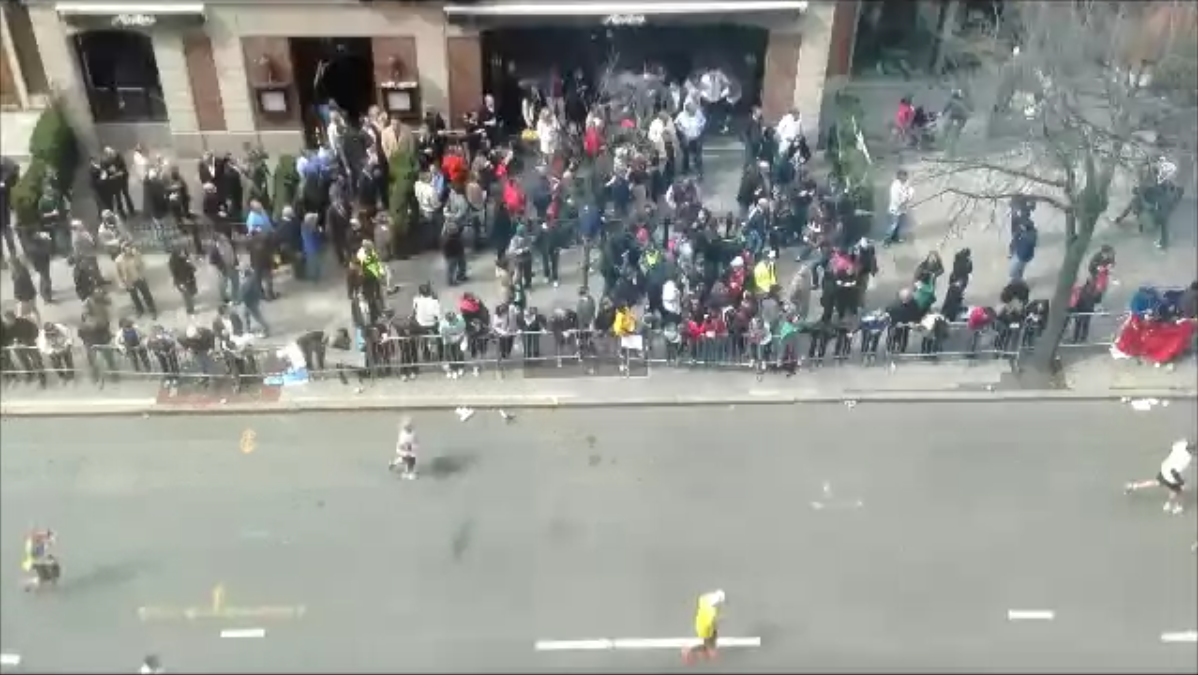 One of the most important pieces of evidence for the Boston bombing is a video shot by Fred Land, a guest of the Mandarin hotel which is located opposite the second bomb site and shifted to the West about 25 meters. So the blast itself is not recorded, but the reaction to it is. The video runs from 1 minute before blast to 7 minutes after blast and shows Boylston street and parts of the sidewalk in front of Abe&Louie's and Crate&Barell, not far away from the Forum. The above snapshot is an exception because it is taken when the repercussions of the bomb reach the camera. That's why for a fraction of a second it doesn't show the entire road, but the entire sidewalk instead.

The authenticity and genuineness of the video is beyond question. It is in accordance with all acknowledged footage on the public market and has a clear and correct time signature. When Mr. Land put it online, it received little attention at first until I detected it accidentally in September 2013 and spread it further. It is most useful in determining the time stamp of photos and videos in the aftermath and has gained access into the prosecution's video compilation of the bombings, which has been presented recently at the trial (because it shows Dzhokhar Tsarnaev running away after the blast).

Another part of the compilation is the Forum video which shows Dzhokhar entering and leaving the area in front of the restaurant. This video falls however short of showing how he “can be seen slipping his knapsack onto the ground”, as promised by the prosecution. I personally can't confirm that observation, and I have collected other points of objection here.

The Fred Land video is an excellent tool to check the authenticity and genuineness of the government's Forum video. And when it comes to the Marathon runners, the videos match 100 percent. I've made several tests, all of them were positive. The Forum video is verified so far.

But there are more people to see than the runners, and they have to match, too. Both videos show a segment of the sidewalk, Boylston Street, North side. The following diagram illustrates that there is only a small gap on the sidewalk which is not covered by either video (in front of Crate&Barrel): 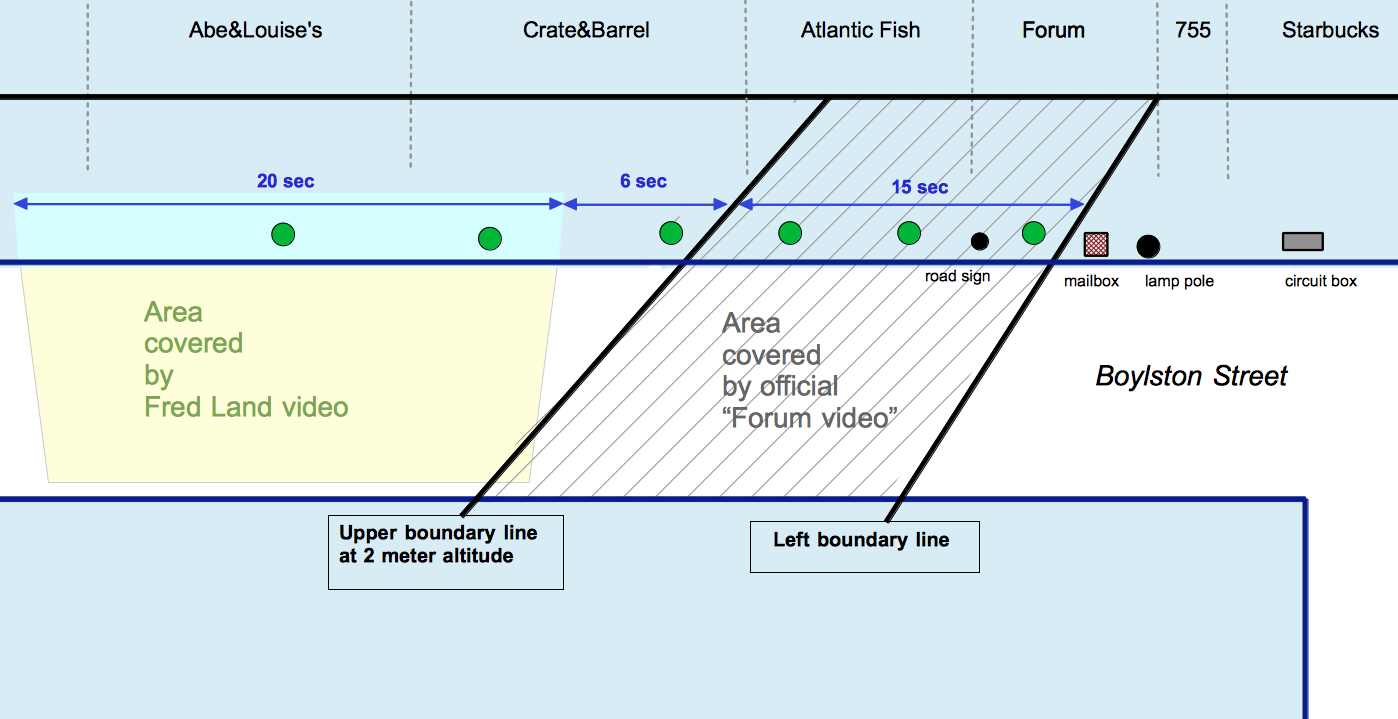 The hachured area is covered by the Forum video. The video shows spectators and a stream of pedestrians on the sidewalk. The walkers enter the screen abruptly at the lower left border and leave it slowly via the upper border – or vice versa. The “2-meter line” defines the boundary where a leaving walker's head is “cut off” – if the head is not visible, but his back still is, he is in the non-hachured area, i.e. the gap between the two videos. It turns out that the gap is only about 6 meters wide. So with an average speed of 1 meter/second, a walker bridges the gap in 6 seconds. He needs about 20 seconds to cross the Fred Land video and 15 seconds for the Forum video.

With this information, it can now be examined if the two videos match. A cursory comparison already reveals an astonishing different traffic density on the sidewalk in the last minute before the explosion. The Forum video shows entire strings of walkers in both directions, passing each other, almost causing congestion. Strikingly opposed to that, the Fred Land video shows little traffic and much, much space on the sidewalk. Compare the title photo with this snapshot from the Forum video, taken at the same moment, i.e. the first explosion: 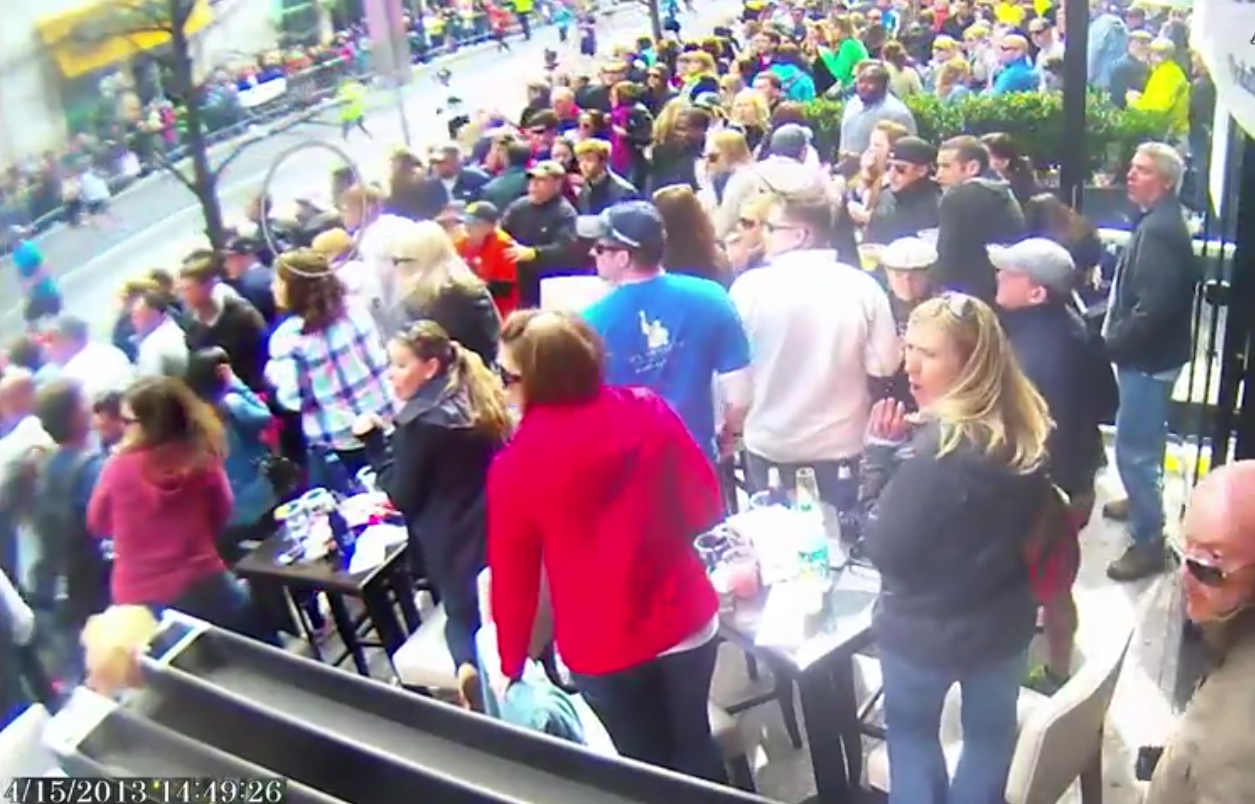