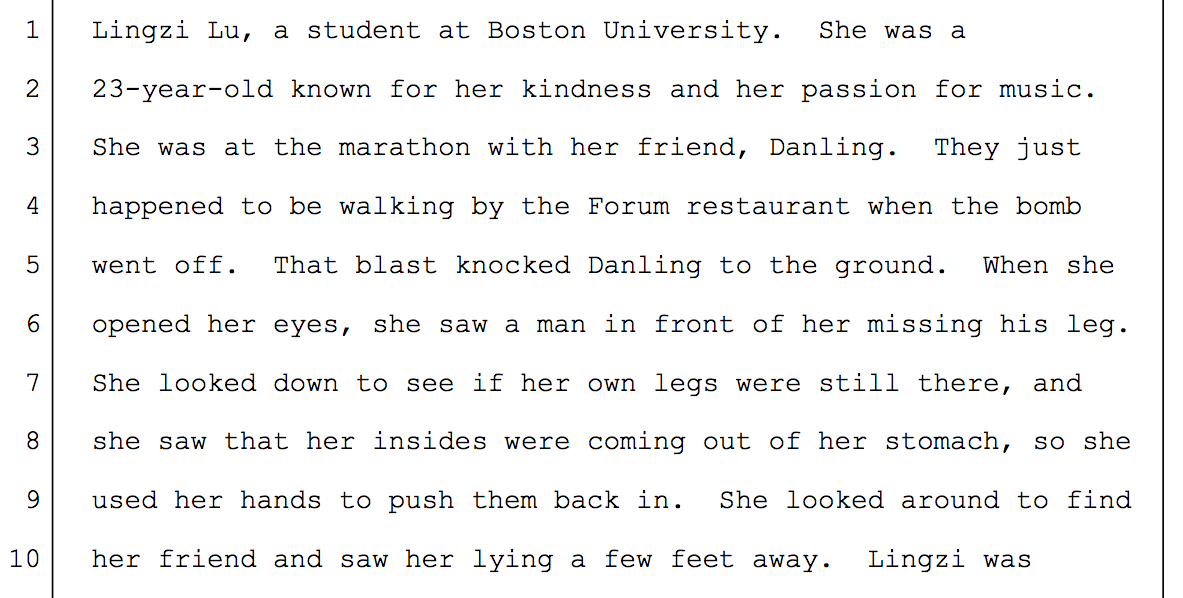 In my previous blog entry I posed the question Did Officer Lauren Woods mix up Lingzi Lu with Zhou Danling? based on Woods' testimony at the Tsarnaev trial. Prosecution attorney Weinreb had already quoted Zhou Danling in his opening statement the day before, but because I didn't follow it in detail,  I missed a truely graphic and bizarre passage:


She looked down to see if her own legs were still there, and she saw that her insides were coming out of her stomach, so she used her hands to push them back in.

Is this supposed to say that Zhou's belly was sliced open by shrapnel and viscera were pouring out? And that she pushed them back into her belly with her hands?

The source of Weinreb's information is unknown; but at least in part it might be a video interview with Zhou conducted by independent journalist Lindsey Mastis. In the week after the bombings, presumably on April 24th, 2013, she visited Zhou at Boston Medical Center and recorded an interview at her hospital bed.

Here's a transcript of what Zhou said:


She's a beautiful girl ((Lingzi Lu)), she really is, and lots of people love here. I saw her injured by her leg, the upside of the leg and I think she's better than me at that point. So I'm not really very worried. It's like I never pass out, just always wake up and I check like my arms and my legs are still there and at first I thought maybe I'm not injured but I feel like something comes out from my body and there I saw it and I just say ((rolling eyes)) "Oh my God" ((smiling)) and I'm just trying to push it back and I stayed there quietly and waited for help.

Lyndsey Mastis interprets this as if her belly was "split open":


She was seriously injured in the second blast. She described looking at her limbs to make sure they were there. She noticed her belly had been split open and she told me she tried to push it all back in. I can’t imagine what that was like.

From this, it's only a short way to Weinreb's "she saw that her insides came out of her stomach". But is this really what Zhou wanted to say?

In order to answer this question, one has to scrutinize her wording closely. She's lying on the ground in a kind of semi-sleep state, sometimes dozy, sometimes awake. She doesn't know if she's injured and checks her arms and legs - has she overlooked a gaping wound in her belly? Hardly imaginable. Then she "feels" that "something" is "coming out of her body" and later sees it. Does she say that she literally watched how her bowel poured out through the sliced belly?

Something doesn't add up here. But looking at her body language - or better, face language - delivers a solution. When she narrates the story how something came out of her body she rolls with her eyes and then smiles shortly.


Her face language doesn't fit the shocking and painful experience of witnessing how her own viscera came out of her belly. Instead, it fits perfectly an embarassing, but harmless body reaction: she had vomited!

Lyndsey Mastis writes incorrectly that Zhou tried to push "the stuff" back in. This is not was Zhou said. She said she tried to push it back, without the "in". This is another distinct hint that the stuff that came out of her body was not her viscera, but what she had eaten before.

So Weinreb has obviously been fooled by a grotesque misunderstanding. But it is more than that. It matches what Officer Woods testified with regard to Lingzi Lu

and corroborates that the young Chinese woman was not Lingzi Lu, but her friend Zhou Danling.