Mineta's timeline in the DoT according to his Chief of Staff 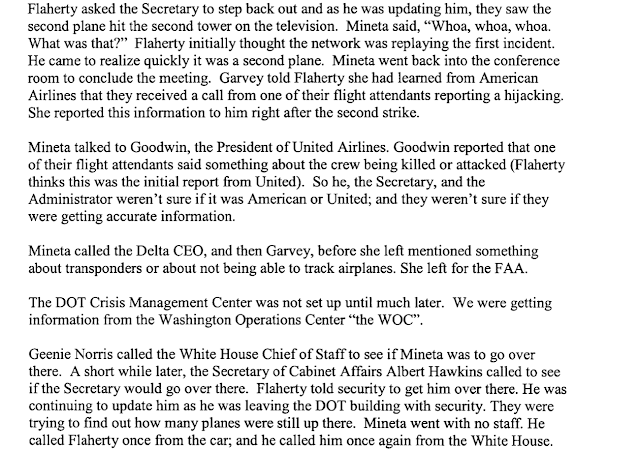 This is an excerpt of the statement of John Flaherty for the 9/11 Commission, who was the Chief of Staff for the Department of Transportation (DoT). He meticulously describes Mineta's timeline inside the DoT before he left for the White House. Mineta had just interrupted his breakfast with Isabelle Durant, his Belgian colleague, when he and Flaherty watched the South Tower impact on TV (unclear if they were in Flaherty's or Mineta's office).

We have to keep in mind the following time data:

-  Mineta needed 7 minutes for the car ride from the DoT to the West Wing of the White House (source: Mineta);
-  After arrival, he first went to the Situation Room to meet with Richard Clarke (1 minute minimum);
-  He stayed there for a short while (different statements, the shortest is 2 minutes);
-  He went to the PEOC via the corridor underneath the White House, a 200 meter walk (2 minutes minimum).

This means that Mineta needed at least 12 minutes from the point when his car moved off the DoT until his arrival at the PEOC (9:20, due to Mineta's account). So assumed his timeline is correct, he had only 5 minutes to perform all the actions described by Flaherty - here's a summary:

*  The South Tower is hit

-  Mineta gets aware of the situation (terrorist attack)
-  Mineta explains the situation to the Belgian minister and excuses himself for ending the breakfast
-  Mineta talks with Jim Goodwin, CEO of United Airlines
-  Mineta, Flaherty, and Garvey discuss the situation
-  Mineta calls the Delta Airlines CEO
-  Garvey calls the Delta Airlines CEO
-  The DoT employee Geenie Norris calls the White House to ask if Mineta should go over
-  A "short while" passes
-  The White House calls back and asks Mineta to come over
-  Flaherty instructs the Secret Service to get Mineta to the White House
-  Mineta grabs some papers and moves to the garage, accompanied by the Secret Service and Flaherty

*  Mineta gets in the car

I neither included the time Mineta needed for walking back and forth in the DoT nor other little delays like simply thinking over the situation. Even so, assuming that this timeline doesn't exceed 5 minutes is completely unrealistic, not to say impossible. Together with the inherent contradictions of Mineta's various statements, this makes his official testimony a stinking red herring. The 9/11 truth movement should stop wasting time with it.