Update 4/6/2014: better determination of the time of photo A added in the middle of the text.

David Silverman is a professional photographer. He was at the finish line on Marathon Day 2013, witnessed the two blasts and happened to shoot some photos of the second bomb site immediately after the explosion. Two of them he posted on his website on April 17th, 2013. They are most interesting and the subject of this blog entry. Considering their significance for the Tsarnaev case, it is astonishing that they have been overlooked for nearly a year. The credits for uncovering them go to "justfacts" from the letsrollforum website where I picked them up.

The first step is to determine the time when they were generated. It is immediately apparent that both photos must have been shot within seconds after the second bomb exploded. By matching them with already published photos and videos it is possible to pinpoint the time very exactly.

Here's the photo which was the earliest one after the blast up to now. I've already posted it in previous blog entries. Let's name it photo C. 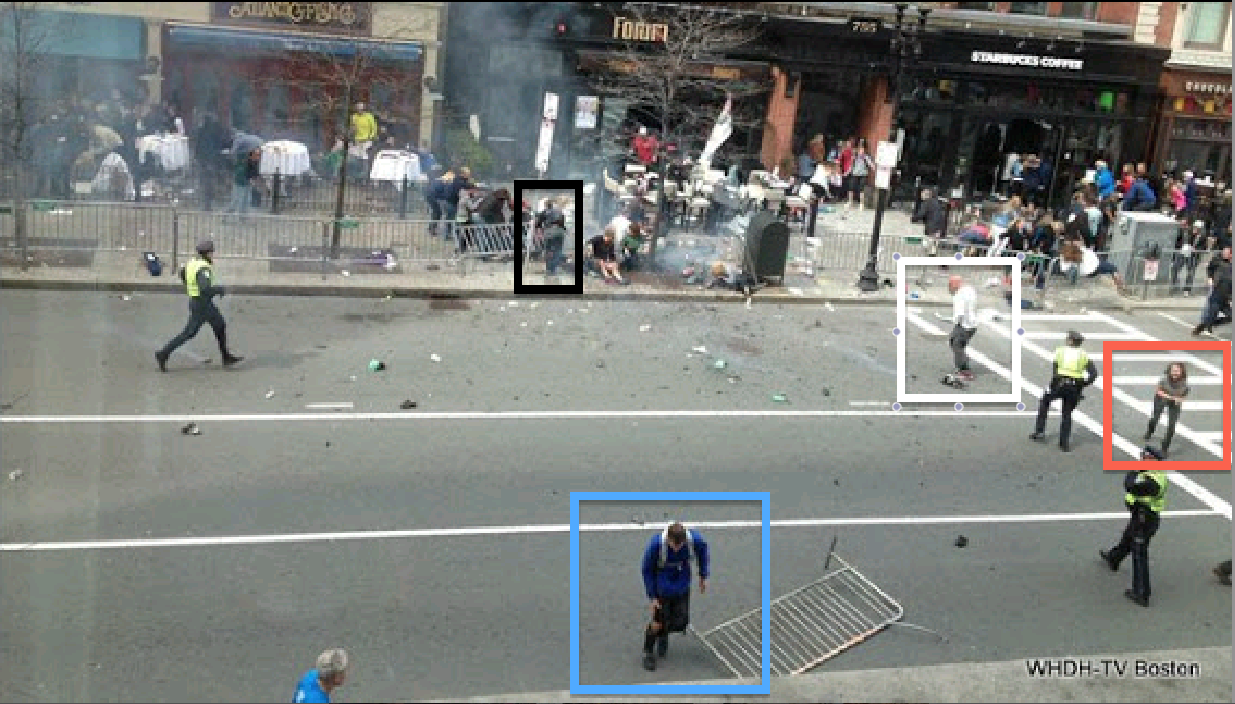 By matching it with the Fred Land video (taking the running policeman on the left side as reference), I determined its time stamp as 13 +-1 seconds after the blast. I marked four individuals through colored squares:

-  black: a man with a black jacket and a black backpack. This man appears in many aftermath photos which I've gathered here. Many believe he is Bill Richard, the father of the killed boy Martin Richard, but this is very unlikely.

-  blue: a man in a blue jacket with dark pants running away from the Forum.

-  red:  a woman with a green short-sleeved shirt and dark pants.

Taking the time that the man in blue needed to cross the street as reference, the time difference between A and C must be at least 3 seconds, which means that photo A must have been shot within the first ten seconds after the blast.

Update: just right of the man in black, there is a man with a blue jacket and a white cap jumping over the barrier. This man can be spotted in the Fred Land video at 1:07, i.e. the photo ist shot 7 seconds after the blast:

The time stamp of photo B can be determined very precisely with the help of this photo (David L. Ryan) and this video of the second explosion. Here's an enlarged cut-out from the photo: 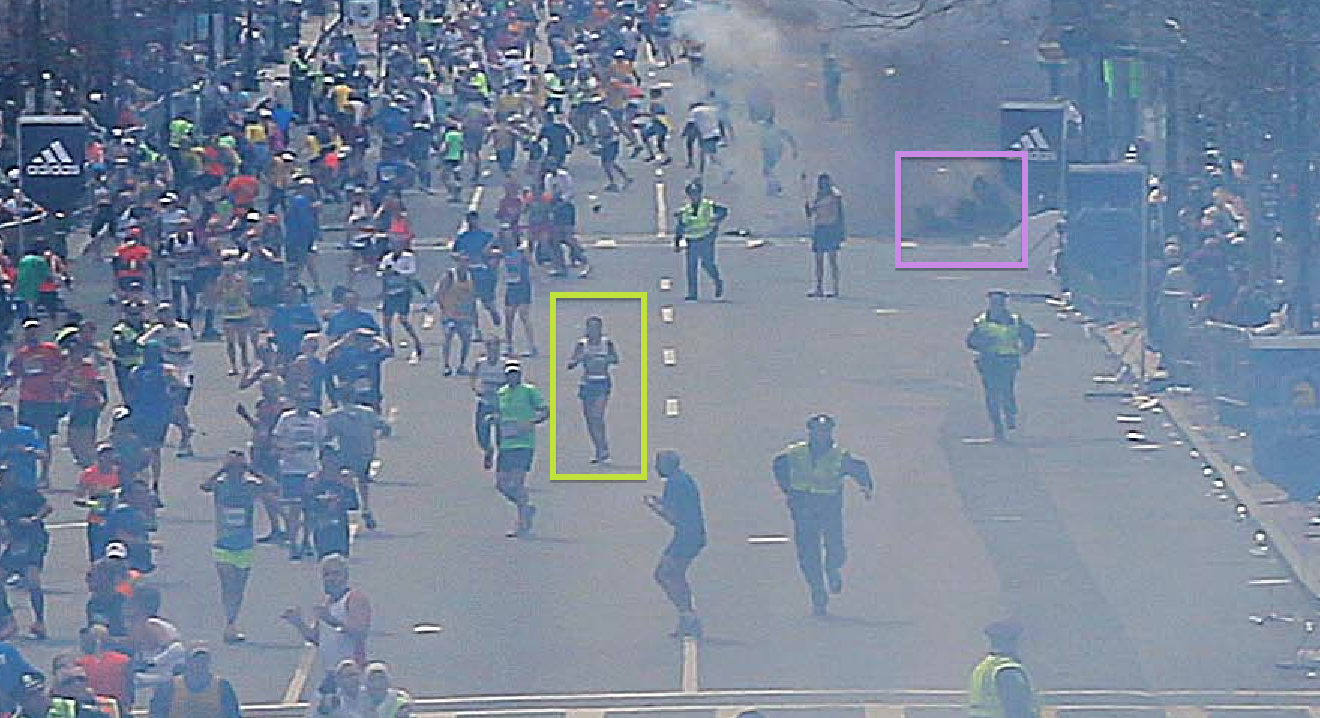 The female runner within the light-green square and "Mr. Poseidon", the bare-chested man with the mask and the spear appear in photo B at the very same position, i.e. the photos must have been shot within fractions of a second: 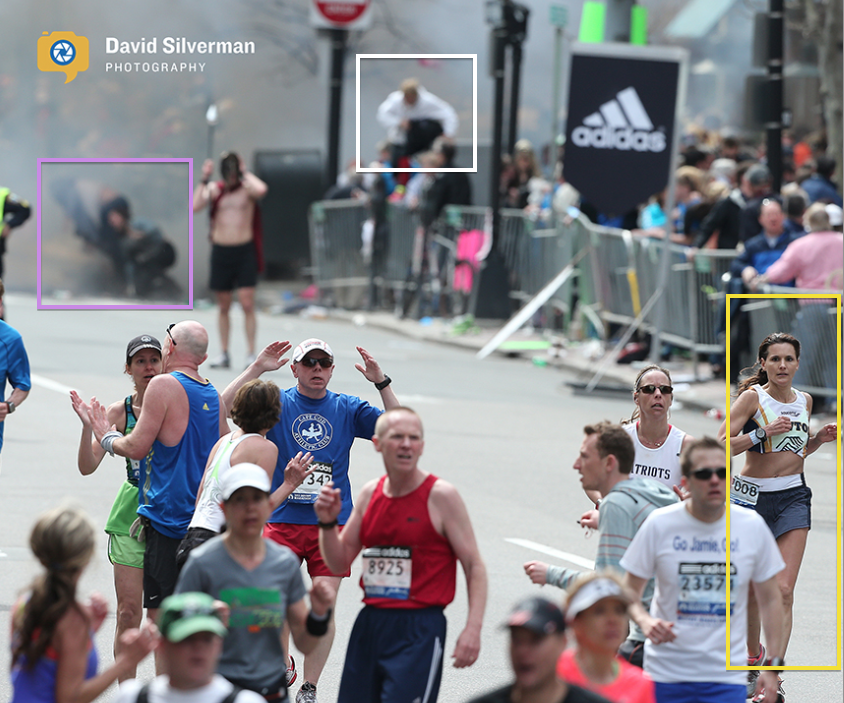 A match-up with the video shows that photo B and the Ryan photo are taken 2 - 2,5 seconds after the blast. I leave it to the reader to check this as an exercise.

Photo B bears more interesting details: first, there are two or more people on the street near the mailbox, marked by a purple square. It is impossible to identify them, but they are probably identical to the people highlighted in photo A. They don't seem to be heavily injured, because all of them move away quickly.

The most interesting detail however is the man in the white shirt. In photo A, he was lying at the mailbox; in photo B, he's not at the mailbox, but seems to be jumping over the metal barriers via the junction box. This might look like an overinterpretation, it is supported by the video however. At 0:05, after the camera has pivoted to the second bomb site, you can see a little, but distinct white spot in the background moving vertically downwards. This is - most probably - the white shirt of our man as he jumps over the barrier. I've marked his position in this still at 0:05: 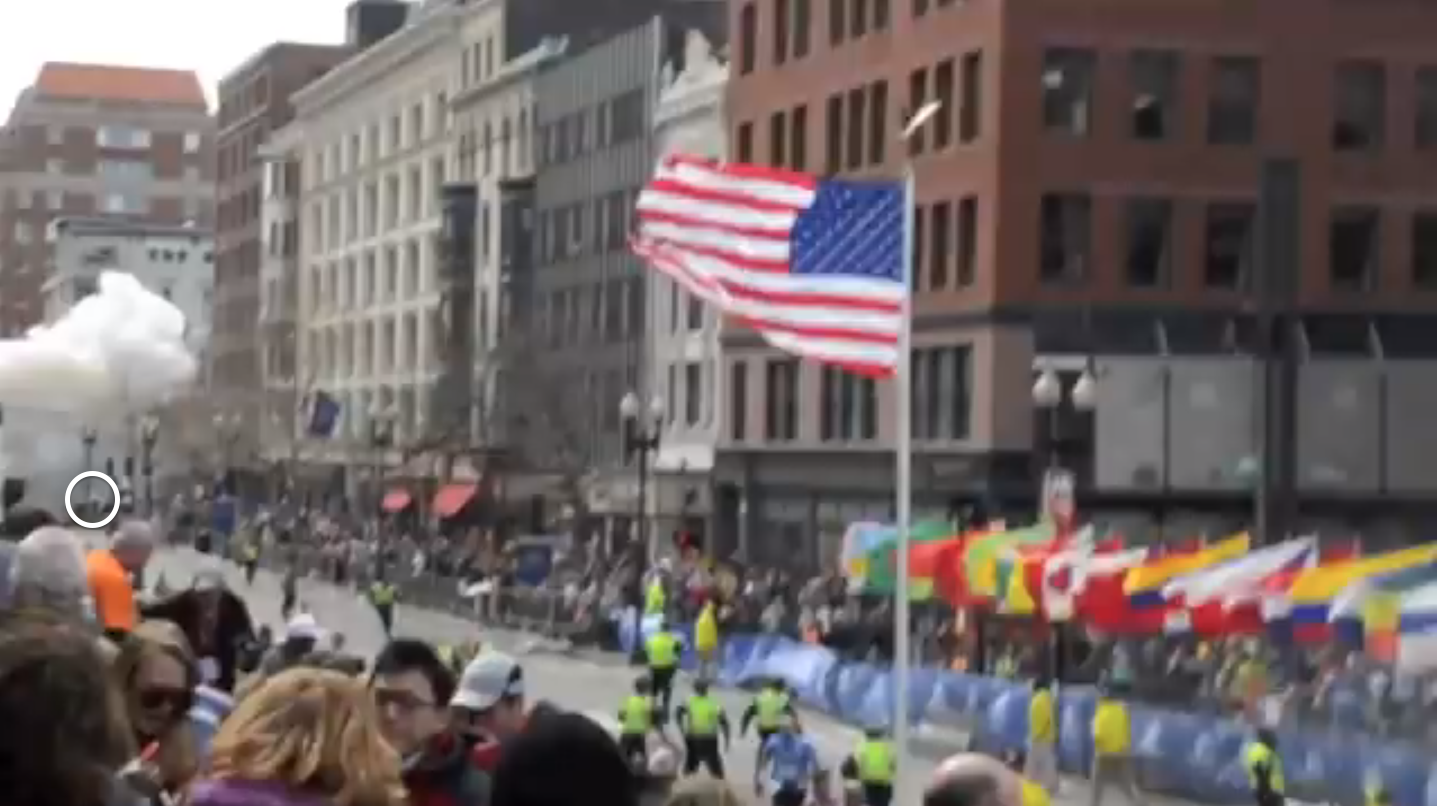 You can follow the white dot/shirt after the jump for a very short time: he moves towards the mailbox. Then the camera sways away from the scene.

The benefit of having established this timeline may not be obvious at the first look; for a reconstruction of the events however it is absolutely necessary. The value of the Silverman photos and the potential to utilize them for the Tsarnaev trial must not be underestimated and will certainly manifest itself in the future.