Fred Langa is a Boston journalist specialized on technics and computer science. Like Bill Hoenk he was a witness of the second blast and shot some photos of the immediate aftermath. He put them on his blog page on April 15, 2013, yet they have received little attention until now.

The FBI knows the photos since April 18, 2013, if not earlier. They visited Mr. Langa and asked him for high-resolution versions.

I have displayed here the four most important ones. Source: fredlanga.blogspot.com. 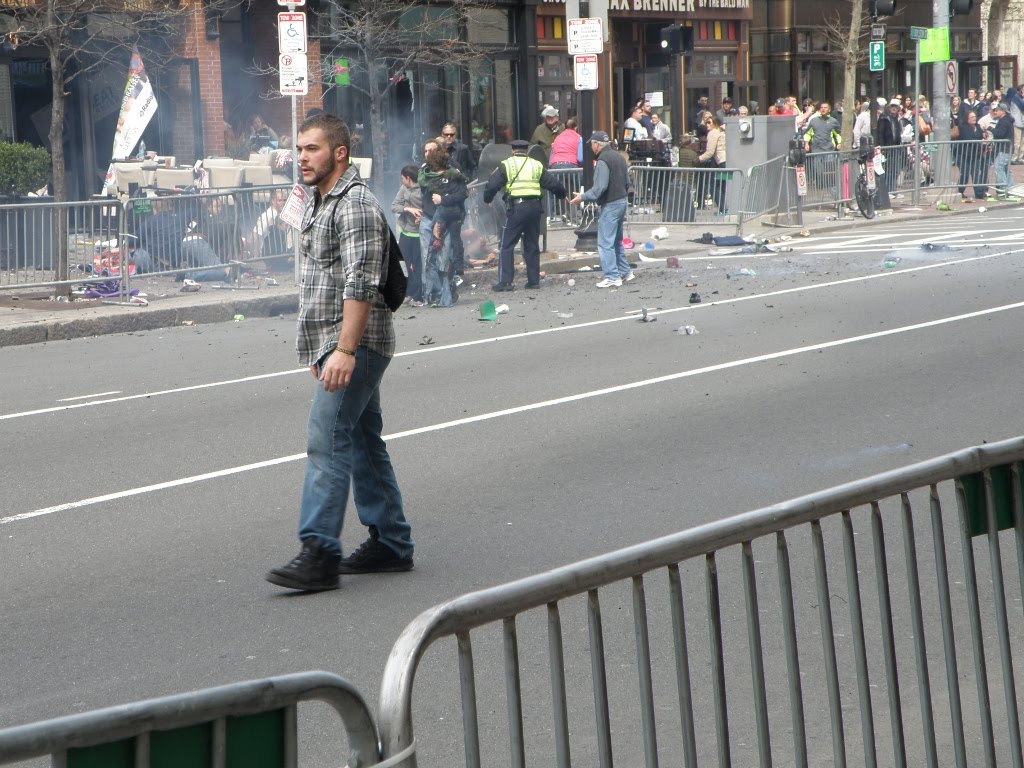 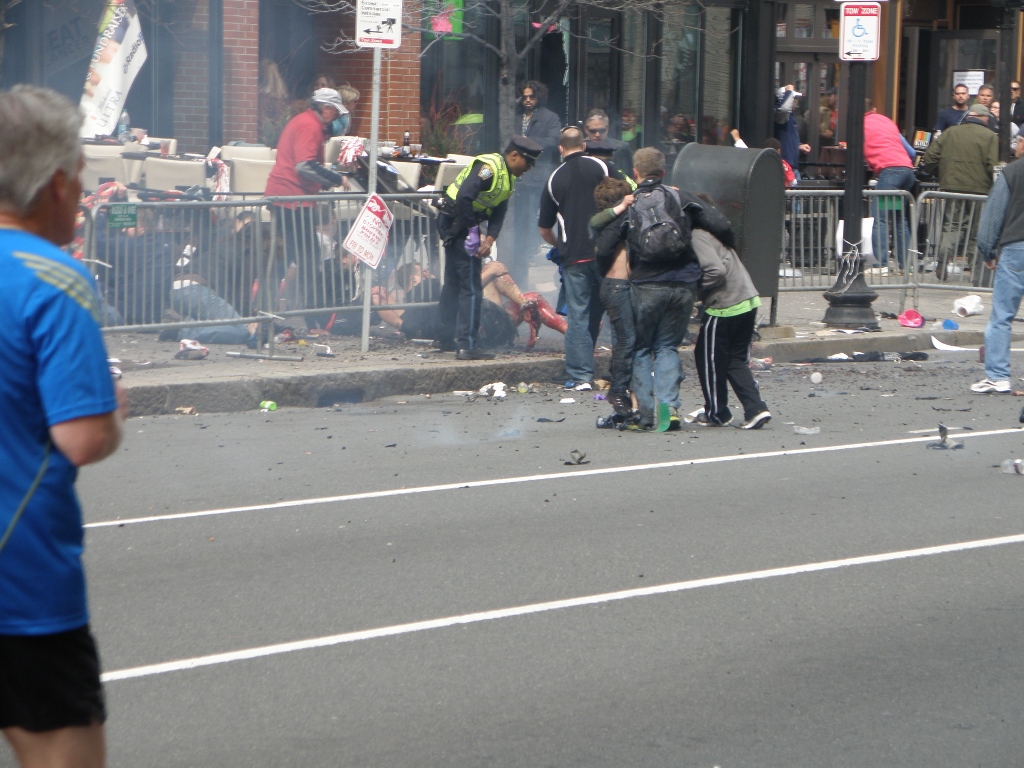 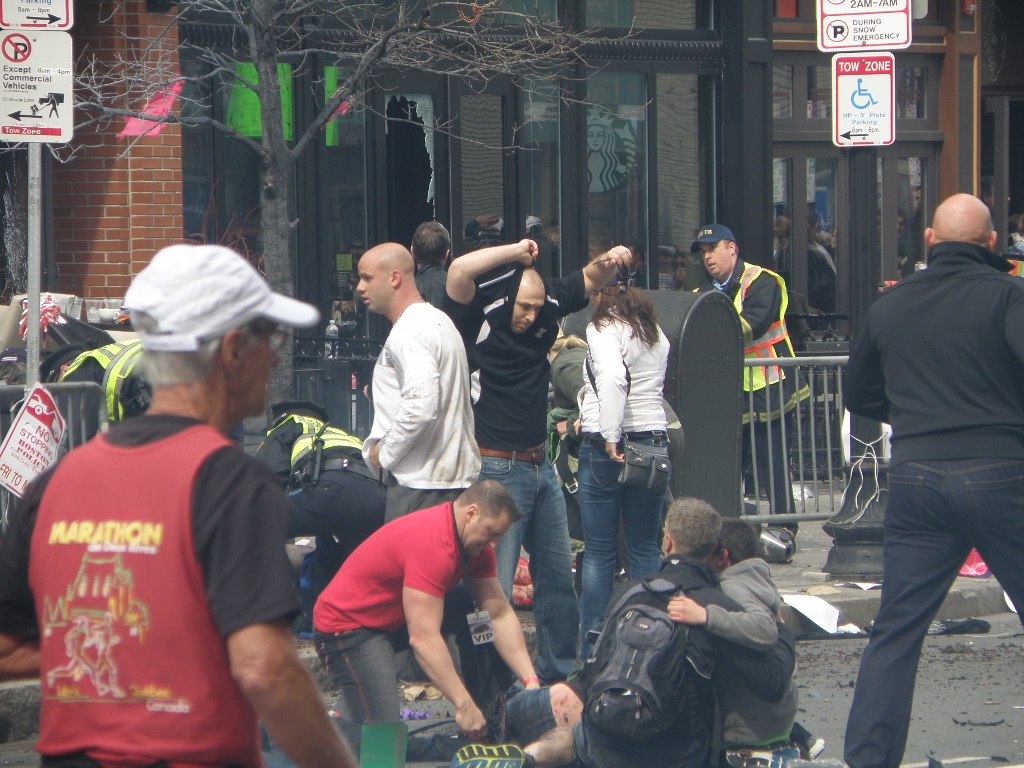 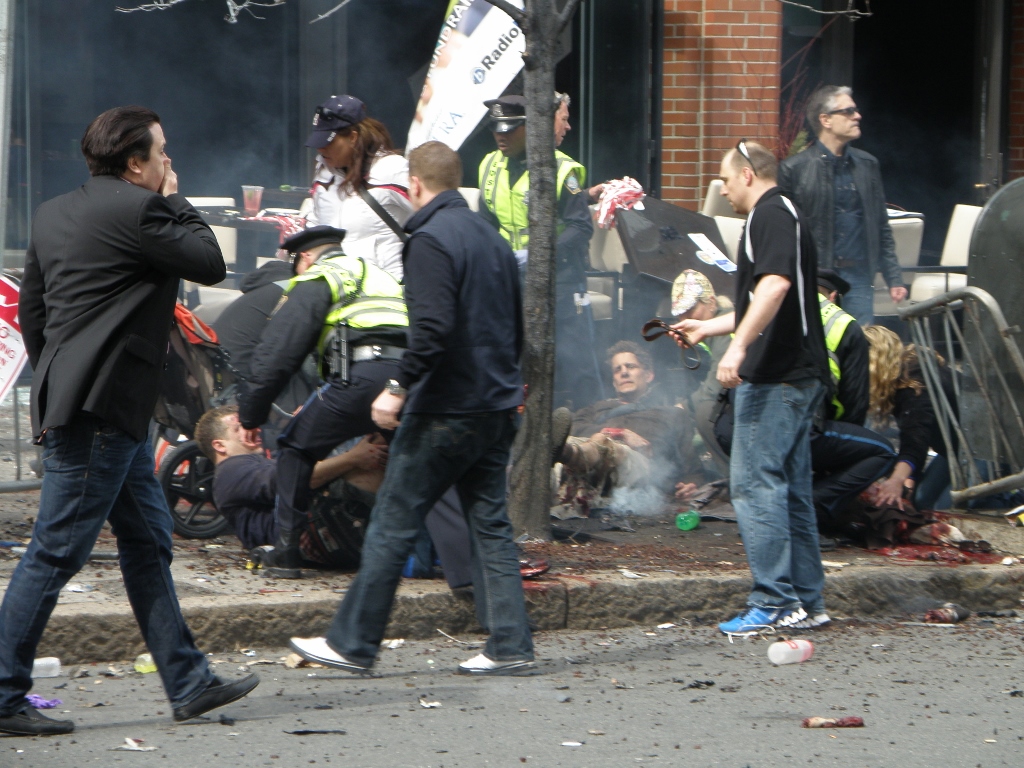 A death verdict based on forged evidence?! 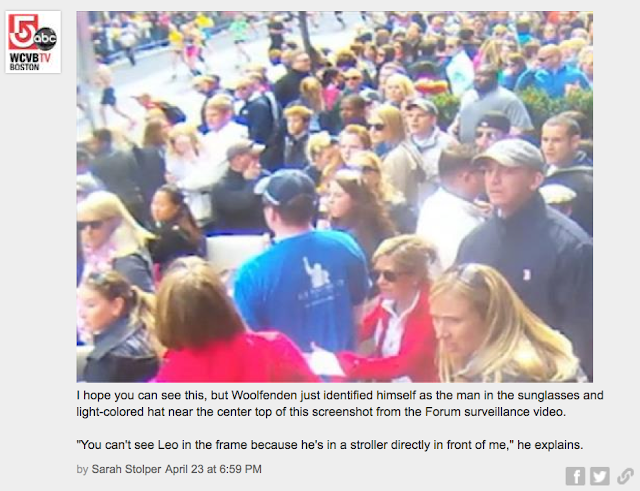 Next Wednesday, Judge George O'Toole will most certainly affirm the jury's verdict and speak out the death sentence against Dzhokhar Tsarnaev. It is remarkable that the verdict is in big part based on a single piece of crippled evidence: the notorious video with Dzhokhar leaving back his bag in front of the Forum restaurant and a subsequent explosion, which allegedly was caused by his bag. It is even more remarkable that, as matters stand, the not-hidden parts of the so-called Forum video are manipulated. But one thing at a time.

Until the trial, the Forum video was not shown to the public who had to be content with more or less vague verbal descriptions. The most accurate account is to be found in the criminal complaint, formulated by FBI agent Daniel Genck. We never heard of him again since, and he didn't testify at the trial either.

Now, after the trial, the situation is as follows: one part of the Forum video has been made public. It continually covers the last four minutes prior to the explosion and the explosion itself, but stops immediately thereafter. Some after-blast segments of the Forum video - let's call them semi-public - were shown at the trial. They are defined as exhibits, but have not been put online, for instance exhibit 1634b. Yet other sequences after the explosion seem to have been completely cut out and not been played at the trial, as attentive court attendees have observed.

Hence it is fair to say that the Forum video is a piece of crippled evidence. Even more unsettling is that the crucial first seconds after the blast belong to the unseen, cut out parts. This time span is most important because it allows to draw inferences with regard to the origin of the blast, just like the Zapruder film in the JFK assassination case. The Zapruder film is so significant because it shows the first seconds after the shoots continuously and from a good vantage point. The Tsarnaev prosecution has not explained why the Forum video's very first seconds after the blast are kept hidden. This is, to repeat it, the central piece of evidence being used to bring Dzhokhar Tsarnaev to death. Not really a fair play.

The matter gets worse if we take a look at the published pre-blast part of the Forum video. There are several authenticity problems coming along with it, here is just a sample:

- it doesn't match Genck's description in the criminal complaint
- it doesn't match other footage made at the same time (Fred Land video)
- it overstrains the viewer's capability to imagine the presence of a 2' x 3' stroller on a crowded sidewalk
- it doesn't match the repeated statement of a key witness - Heather Abbott -, showing her at a different place in the moment of the explosion than she herself stated at the trial

Given the many cameras roaming around on Marathon day there is reason to believe that the Fred Land video is not the only footage in conflict with the Forum video. During the trial, the defense lawyers have been very tight-lipped about the evidence they acquired by their own, but they might well be in possession of unseen footage of the crime scene. Miriam Conrad's cryptic cross-examination of FBI photographer Michelle Gamble points into this direction. It looks unlikely that the prosecution's version of the Forum video will stand history.

A death verdict based on crippled and forged evidence is common in ruthless dictatorships. For the USA - in their own view a democratic society based on justice and human rights - it opens the door to a full-scale Orwellian police state.


On the day of the Marathon bombings, the Boston broadcast station WGBH published a slideshow of 20 photos from the aftermath. Here is photo 3 with the underlying text: 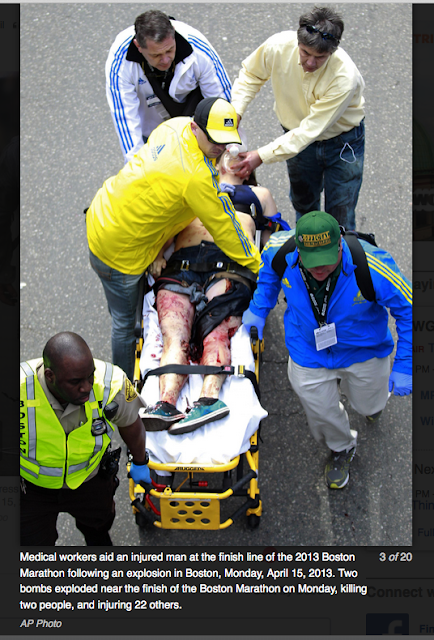 The text is incorrect, however. The injured person is not a man. It is Krystle Campbell on her way to the medical tent. According to Dr. Allan Panter, the man in the beige shirt who treated her in her last minutes, she was not dead at this moment, but her heart worked only faintly and stopped beating after the arrival in the tent.

“From the waist down, it’s really tough to describe, complete mutilation. That’s all I can say.” (Frank Chiola, Boston Police officer, at the Tsarnaev trial, with regard to Krystle Campbell).