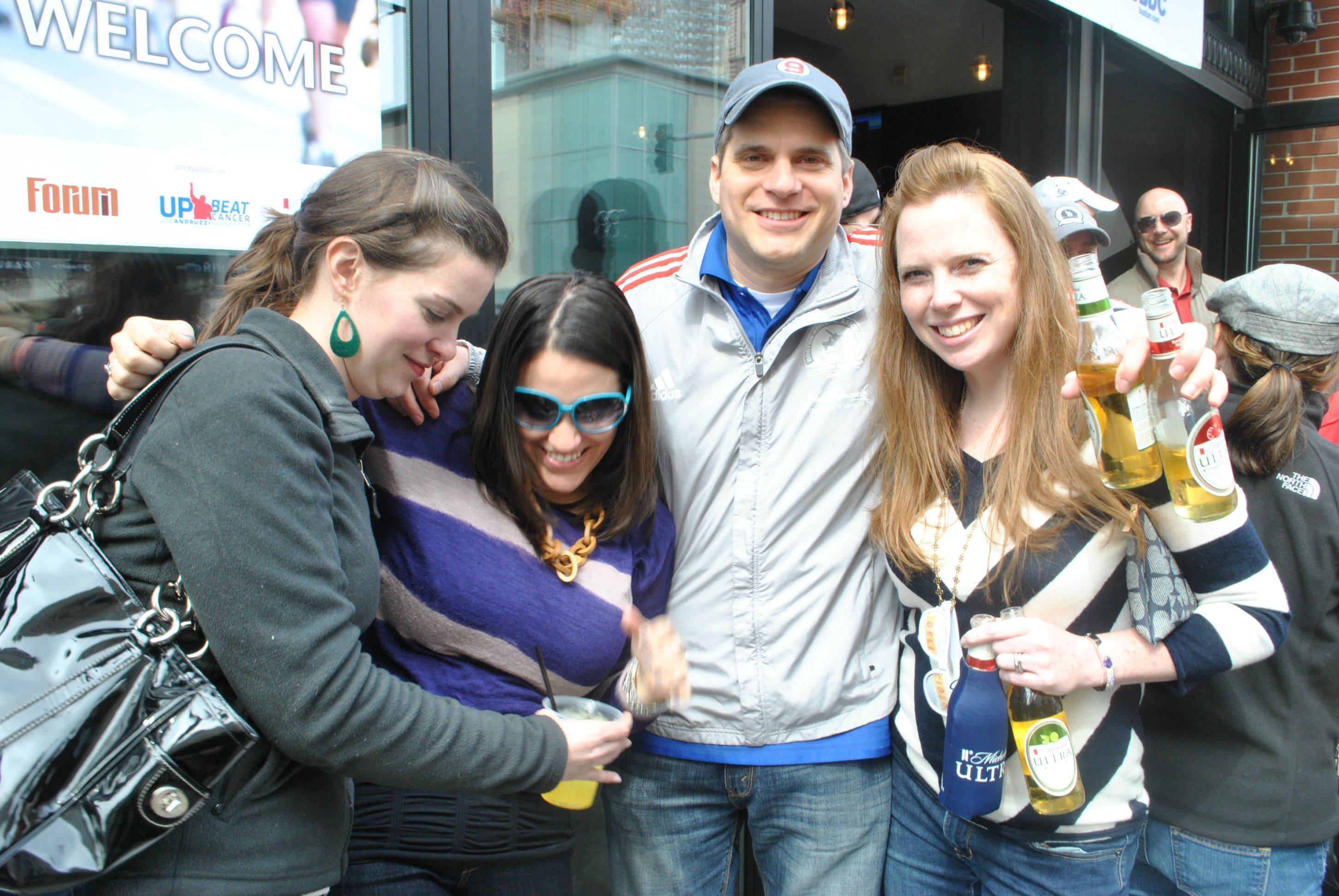 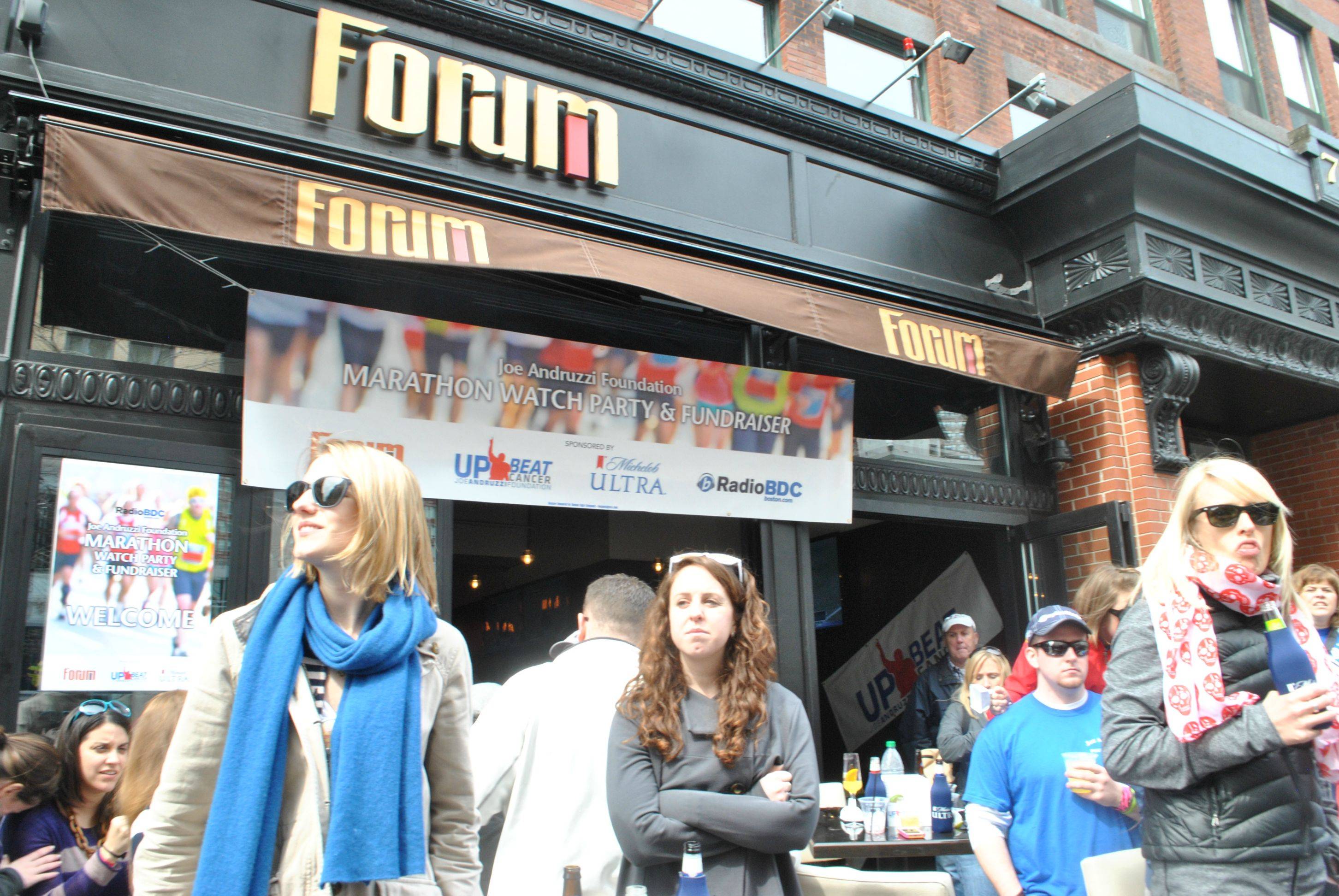 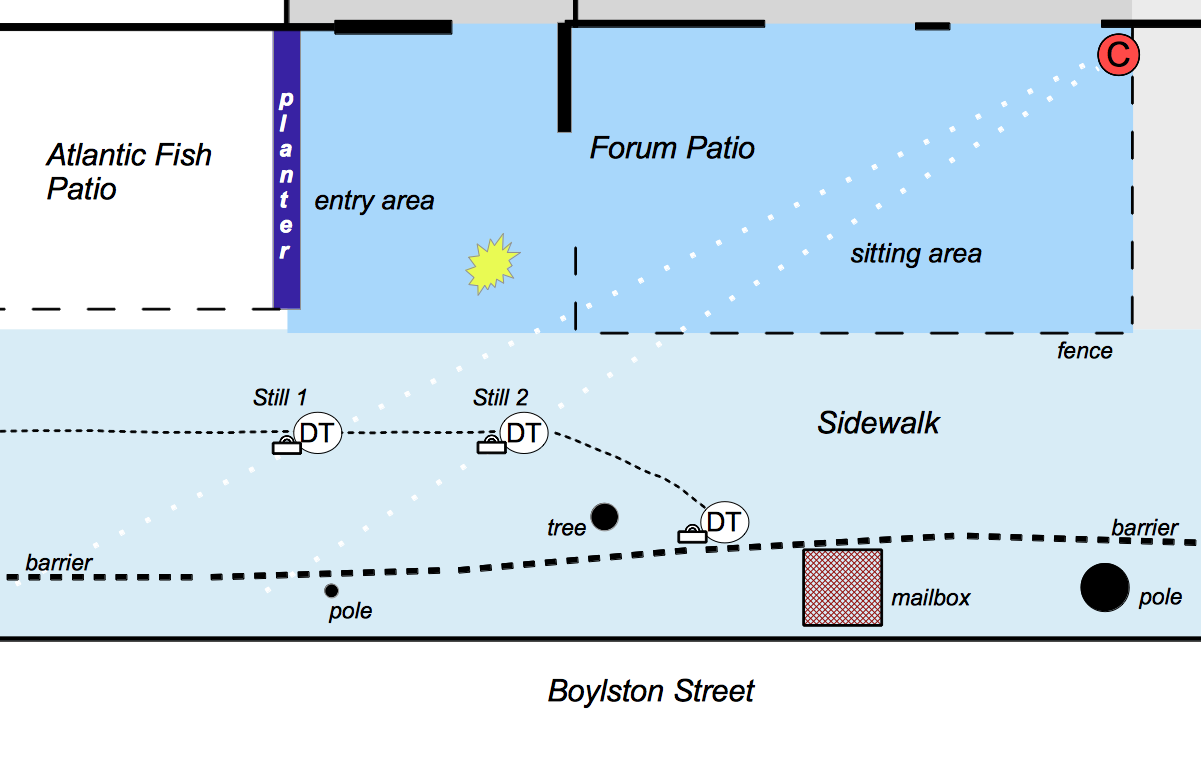 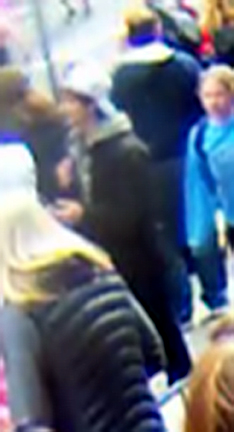 I have posted an update here.

This picture (original URL) belongs to 16 photographs and video stills with the Tsarnaev brothers, published on the FBI website on April 18, 2013. The page ist still available under this URL:

The photo's blurriness doesn't hinder the fact that it bears most valuable information regarding the whereabouts of Dzhokhar Tsarnaev prior to the explosions.

It shows a segment of the sidewalk of Boylston Street, but where exactly was it shot? Dzhokhar walks alone, his brother is not with him - which would narrow down the location to the sidewalk in front of Atlantic Fish or Forum, after the brothers had separated. However, Tamerlan might just be out of view of the photographer, so this is no reliable conclusion.

Two details enable it to narrow down the location very well. In the background is a pole, apparently belonging to a road sign. It might be the one in front of the Forum entrance, but there are of course many road signs along Boylston Street.

In the foreground, you see the back of a woman with straight blond shoulder-length hair. She wears a striking black sleeveless thermo vest, underneath there's a gray/green jacket or shirt.

There are many photos with spectators standing on the patio of the Forum (sitting area, within the fence) prior to the blast. Some of them show a woman with the same hair and the same clothing as in the FBI photo. Here is one of these photos - the lady in the center: 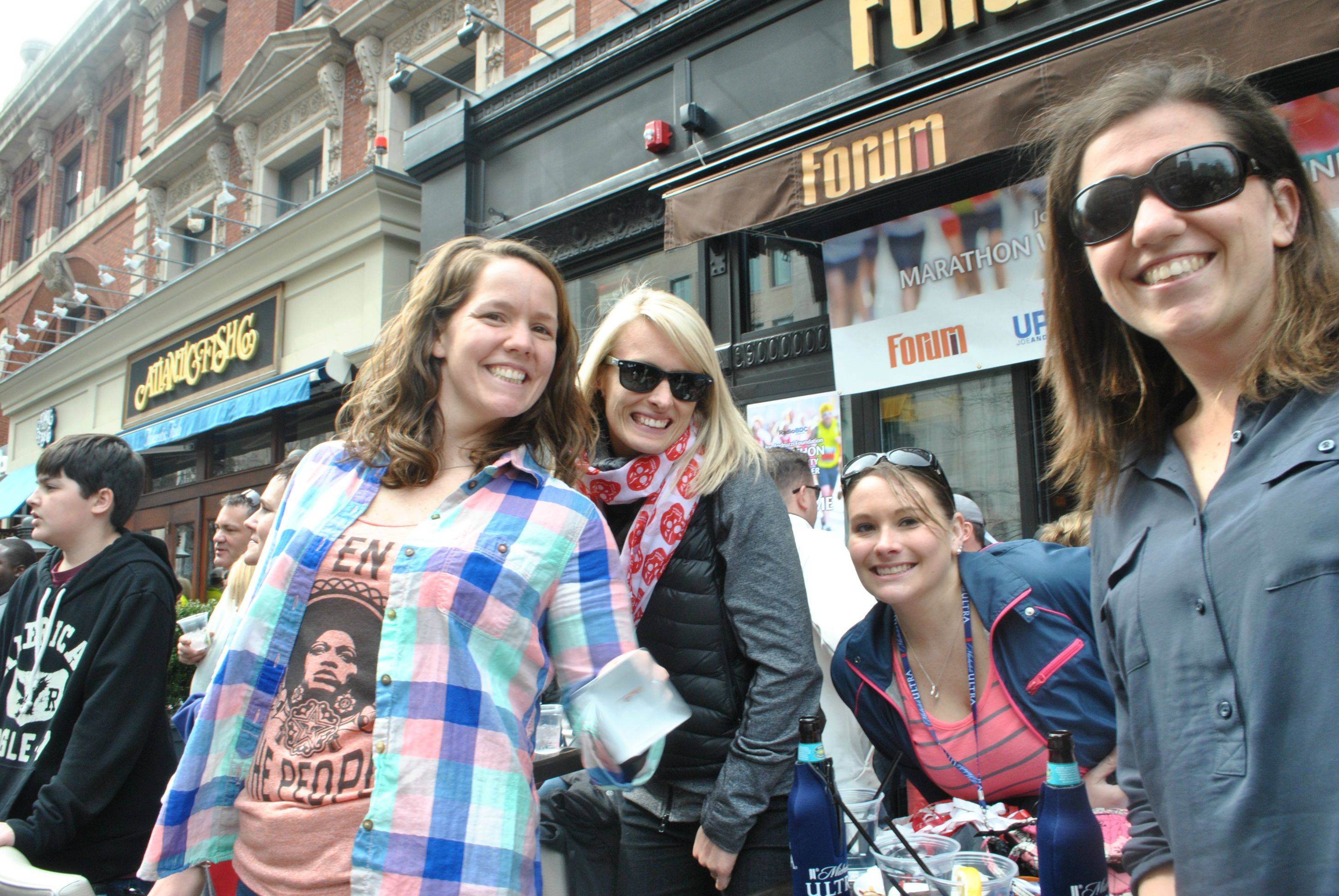 The congruences are sufficient to say that the photos show the same woman. This insight is anything but trivial: it is strong evidence that the FBI photo shows Dzhokhar walking on the sidewalk in front of the Forum.

To narrow down his location further, note that if you draw a theoretical line between the pole and the woman in the FBI photo, Dzhokhar is just about to cross this line. The location of the pole is known; the location of the woman seems to be roughly in the middle of the patio (sitting area) at the fence. And indeed, on all pre-blast photos (not only the one above) the lady is standing right in the middle of the sitting area. A good compilation of pre-blast photos is here.

With these two "landmarks", Dzhokhar's position can be determined quite precisely: 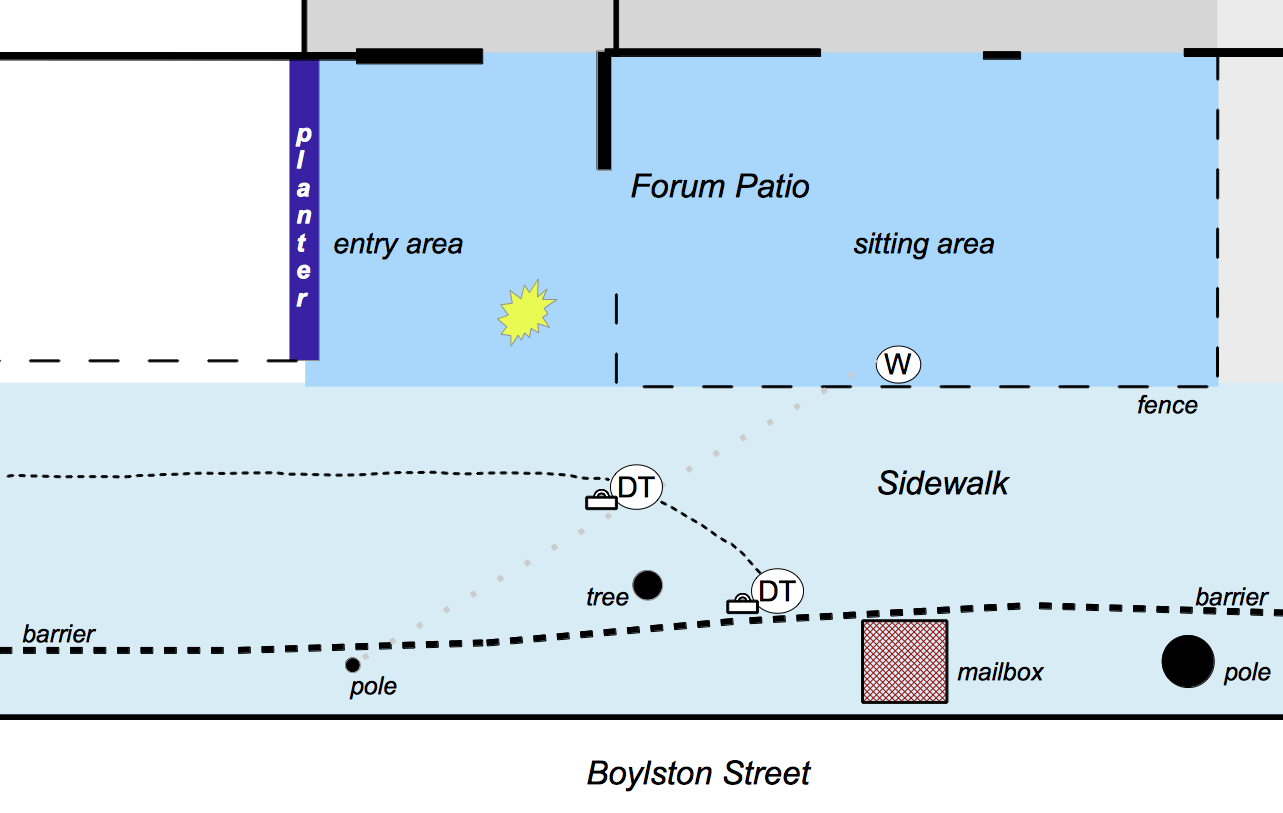 
The FBI photo is highly significant because it shows that Dzhokhar did not enter the patio, but passed it - he obviously went on straight to the metal barrier near the mailbox. It is therefore an independent confirmation of what has been described in the criminal complaint:

As I have stressed in many blog entries, publicly available photographic evidence and eyewitness statements show undubitably that the bomb exploded on the patio, entry area. But two official documents confirm that Dzhokhar Tsarnaev did not enter the patio, still less dropped his bag there.