Black Powder or Nitroglycerin - what made the pressure cookers explode? 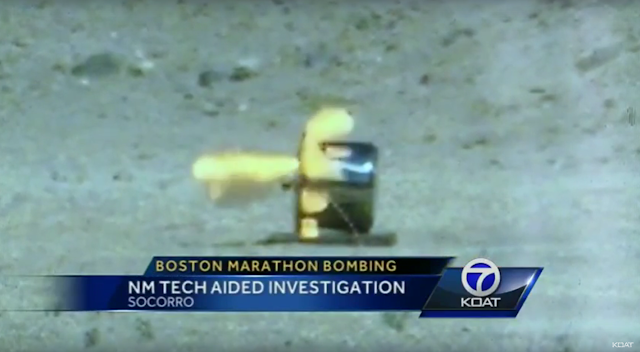 Days after the Marathon bombings a crowd of TV journalists and explosive engineers flocked into the desert of New Mexico. The New Mexico Institute of Mining and technology, shortly New Mexico Tech, is recognized as home to some of the top explosives minds in the world. For each media crew the experts conducted a simulation of the blasts at Boylston Street. They filled a pressure cooker with an explosive and a couple of metal nuts, let it explode and recorded the explosion.

Three of these experiments are available on video:

Clip 1 and 3 were obviously recorded on the same day in April 2013 because the set-up is exactly the same. The wooden shield left of the pressure cooker and the items in the background are identical in both clips. Moreover the length of the shadows shows that Clip 3 was recorded around midday while Clip 1 was taken in the afternoon, i.e. after Clip 3. The set-up in Clip 2 is different, and it was probably recorded after the other two.

The nature of the explosive is not revealed, but it can easily be concluded that it was black powder: it is ignited by heat, not by a shock wave (you can see the smoldering fuse cord), so it's not a high explosive - and it produces the white smoke typical of a black powder explosion.

Dr. Van Romero is the vice president for research at New Mexico Tech and a demolition expert. He guided the various reporters through the experiment. Romero became famous when he stated on the day of the 9/11 attacks that there must have been explosives placed inside the WTC towers to take them down. He retracted this comment a few days later in favor of the official theory that the fire caused by the plane crashes made the towers collapse.

In Clip 3, chronologically the first experiment, there is a stunning lack of damage by shrapnel in the plywood shields. 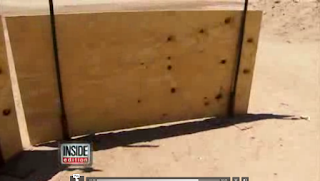 According to Romero, this was because the pressure cooker was placed upright. 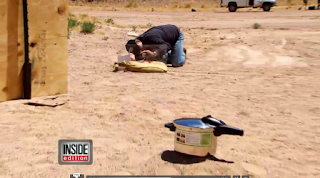 Romero: "Everything went straight up. Most likely what happened in Boston was that it was turned on its side, so everything shot out into the street." 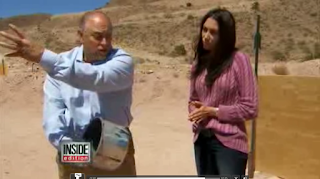 Indeed Clip 3 shows that the blast sends the lid vertically upwards, and this is the reason why the plywood shields were not hit by the metal nuts.

Also - most important - the bottom part, the pot, is not shredded, but still in one piece. Romero has it in his hand. The next picture shows that it is still at the same place after the explosion (blurry, but distinctly recognizable below the white smoke): 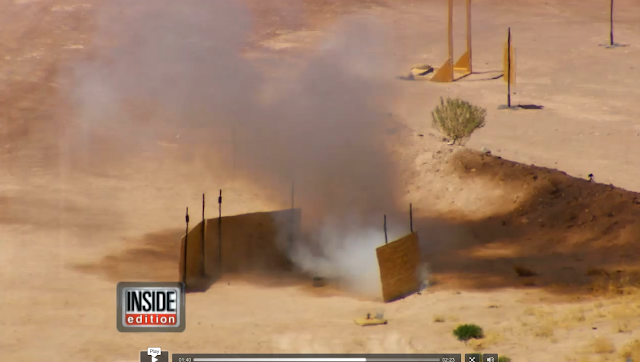 Clip 1 is taken only a few hours later, and Romero has reacted to the problem. Now the pressure cooker is turned so that the lid is pointing to the side. 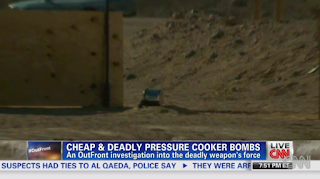 And this time the nuts indeed have pierced the plywood. 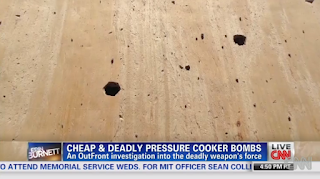 The most puzzling thing is that the pot this time has been shredded into sharp-edged pieces, as opposed to Clip 3, despite identical conditions (with the exception of the alignment of the pressure cooker). 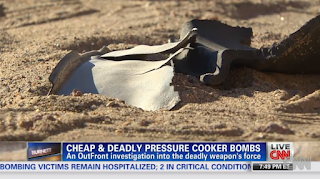 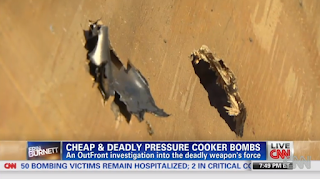 In Clip 2, the pressure cooker is turned onto the side just as in Clip 1. And again there seems to be shrapnel from the bottom part flying around. But a closer examination of the footage of the explosion shows that Clip 2 is not genuine at this point. Here is a series of snaphots of the explosion. In snapshot #6, suddenly a plywood shield emerges on the right side which was not there before. 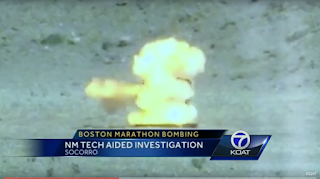 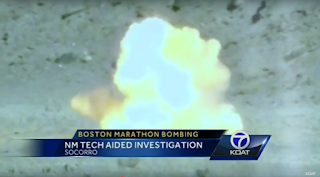 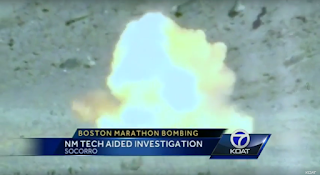 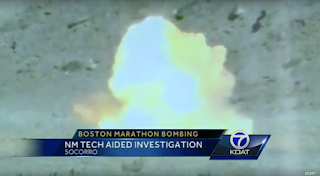 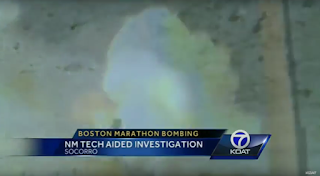 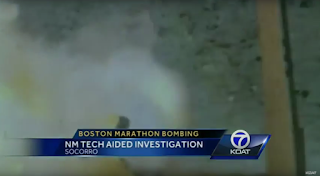 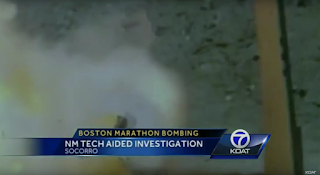 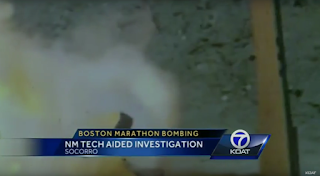 This video segment ist obviously composed of two different videos and a cross-fade between them. Subsequently, a piece of shrapnel, allegedly from the pressure cooker, flies towards the shield. 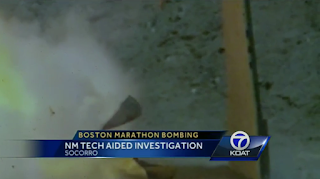 So the manipulated Clip 2 seems to corroborate Clip 1 (but contradicts Clip 3) in that the pot is shredded into pieces by the explosion.

The ambiguous results of the experiments and the obvious manipulation of Clip 2 raise the question whether the black powder used in the New Mexico experiments was really powerful enough to shred the bottom part into pieces - or if it only blew the lid off, slightly deforming lid and pot, but not shredding them.

Snapshot #1 of Clip 2 is a valuable hint that the latter ist true. 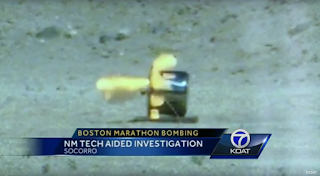 It shows that the pressure wave of the explosive leaks via the weakest point which is where pot and lid are screwed together. The bottom part is not shredded, it remains in one piece. Obviously the black powder utilized in the experiments is not powerful enough to shred the pot.

This is highly relevant for the Marathon bombs because they sent their destructive pressure wave, nails and ball bearings included, in all directions, not just through the lid. It hit people nearby in a 360 degree angle around itself. Van Romero is ill-informed by stating that the blast "shot out into the street". It shot into all directions.

The final conclusion is that the New Mexico experiments actually show that black powder was not able to create the powerful and destructive explosions at the Marathon. The pressure cooker must have been filled with a stronger explosive, maybe a nitroglycerin-based smokeless powder. As the conviction of Dzhokhar Tsarnaev is based on the (probably right) assumption that his bag contained black powder, this renders the assumption fallacious that his bag caused the deaths and injuries of people at the Forum.
Posted by Woody Box at 9:01 PM