Tsarnaev never confessed the use of pressure cookers 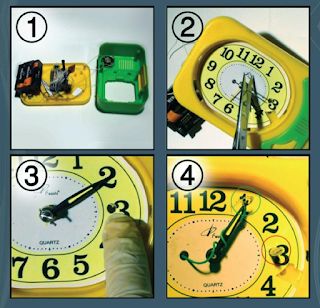 The so-called hospital confession of Dzhokhar Tsarnaev has finally been published, whereas in a heavily redacted form (see here and here, courtesy of NBC). The residual content has to be taken with a grain of salt: he was recovering from a live-saving operation 12 hours ago, under the influence of drugs, not able to speak but only to react by nodding or shaking his head. The FBI claims he wrote some answers on a pad, but the pad itself has not been introduced into evidence. So there is plenty of room for interpretations, misunderstandings, and deliberate modifications by the FBI.

Even leaving these shady preconditions aside, the document raises more questions than it answers. The most obvious is that Dzhokhar indicated (allegedly) that his backpack was brown. Yet official FBI photos of the remnants of the second pressure cooker bomb show that it was contained in a black backpack:

But also the nature of the bomb itself doesn't fit the official narrative. First of all, the term "pressure cooker" doesn't appear in the document, only an unspecified "explosive device". Taking into account that the well-known video footage doesn't seem to show that Dzhokhar's bag contained a pressure cooker this strongly suggests that his explosive device was something different.

According to the document, the brothers followed instructions by the "Inspire Magazine", an alleged Al-Qaida outlet, to build the bombs: 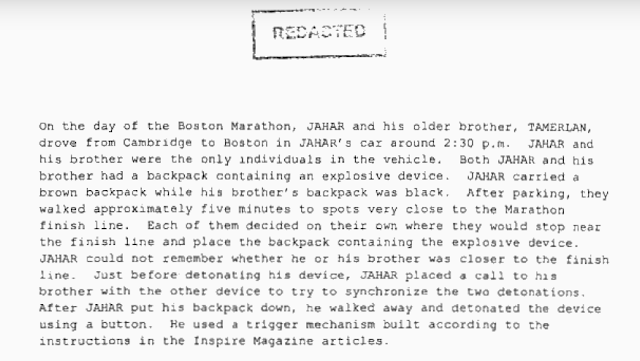 The Inspire Magazine article is titled "Make a bomb in the kitchen of your Mom" and written by an obscure individual naming itself "the AQ chef". It was part of the first issue, published in 2010, and is available online here:

According to the FBI, Dzhokhar detonated the device after walking away, using a "trigger mechanism according to instructions in the Inspire Magazine articles". These instructions, however, don't feature a remote-control trigger - they describe a time bomb with a simple manual clock serving as the trigger, with a wire reeled around a clock arm.

The official narrative never mentioned a clockwork bomb, and given that Dzhokhar moved away from the bomb only 5 seconds before it exploded it is absurd to assume that he used this rough and dangerous mechanism. Also the FBI told congressmen in a briefing that they found a remote control for toy cars which was used to ignite the bombs.

The FBI can't have the cake and eat it, too. Either the bomb was triggered by remote control - or by a clockwork. The IM article makes no mention of any remote control devices - so it can't be taken as reference that the Tsarnaev brothers followed its instructions.

The IM article also suggests to use the heads of matches to obtain the explosive substance. It claims that by mixing it with sugar and putting it into a pressure cooker, a highly explosive device is created. This is outright nonsense. The crucial substance in matches and fireworks is potassium chlorate, a low explosive that indeed causes an intense fire when mixed with sugar and ignited. But this "explosive device" equals only a firecracker and is way too weak to make a pressure cooker burst. Here's an instruction quite similar to the IM article:

The producer of the fireworks which were purchased by the Tsarnaev brothers also denies that this substance could have the devastating effect of the Marathon bombs.

There is widespread believe that the "explosive devices" planted by the brothers were only smoke bombs, presumably part of the ongoing emergency drills. I subscribe to this conjecture, and Dzhokhar's "confession" definitely tends to confirm it. More insights could well be hidden in the redacted parts of the document.