Opposed to what many believe, the recently enacted criminal complaint against Dzhokhar Tsarnaev doesn't prove his guilt. Just to the contrary, it proves that he did not plant the second bomb at the Boston Marathon.

The complaint provides us with detailed data about his whereabouts on Boylston Street, and there is no reason to assume that these data are not correct. Here's the crucial excerpt: 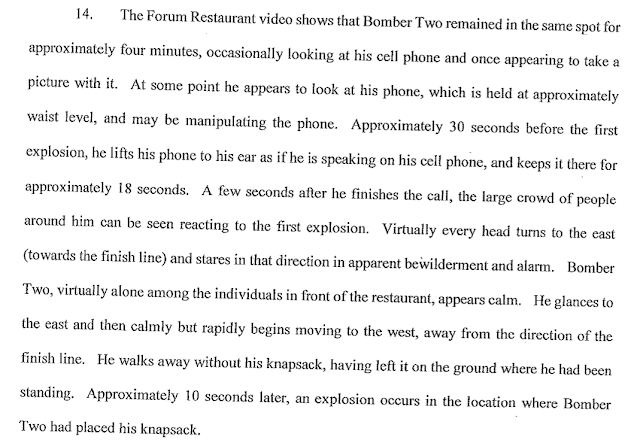 The complaint is very clear about Tsarnaev's position when he dropped his knapsack: he was on the sidewalk, among the spectators of the marathon. The fact that the opposite camera shows the knapsack at his feet implies that he was not standing in the second or third row behind other people, closer to the restaurant, but pretty close to the metal barrier, as emphasized by the complaint.

The second bomb however exploded right on the patio of the Forum restaurant. This is at least what the restaurant's website says: 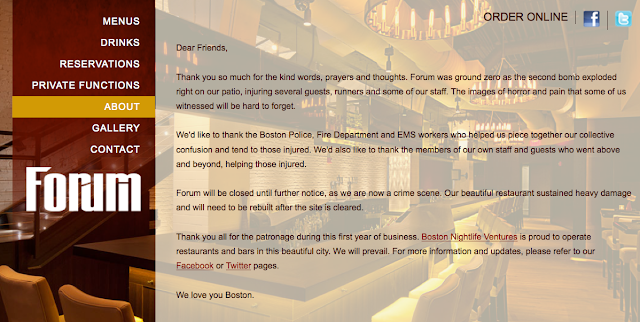 There are several sources confirming the explosion on the patio:

And while many restaurants along Boylston Street were severely damaged by the explosions (Eater has a running list), one restaurant in particular stands out: the second bomb exploded on the patio of Forum, injuring guests and waitstaff as well as runners, and severely damaging the restaurant.

Down the street, Lynne Douglas of Columbia heard the first explosion as she ran down the right side of Boylston — within a block of the yellow band with "FINISH" lettered in blue. She saw the smoke rise, but she and the other runners nearby kept moving.

Police officers lining the road were alert but didn't seem too concerned. Her first reaction was that it was a gas explosion.

Seconds later, directly to her left, another explosion on the patio of the Forum restaurant sent something — she doesn't know what — straight into her leg, cutting her skin. "At that point I knew it was bombs," she says.

Boston's Forum restaurant on Boylston Street was at the epicenter of the tragedy, with the second of two bombs exploding on their patio. Several guests and staff members were injured in the blast, and the restaurant sustained extensive damage.

In the days after the attacks the exact position of the bomb underwent an intriguing metamorphosis: now the bomb has allegedly not exploded on the patio, but outside the patio. But this is an obvious cover-up.

First: which of these sources is the most trustable? Certainly the restaurant owners themselves who clearly state on their website that the bomb went off "right on our patio". Note that the patio is distinctly separated from the sidewalk by a small fence. Note also that the restaurant owners certainly would have preferred to say "near our patio" to "right on our patio" for image reasons, i.e. this is no inconsiderate wording.

Second, pictures of the second explosion clearly show that its epicenter was not at the metal barrier at the roadside, but closer to the buildings - look at the flames: 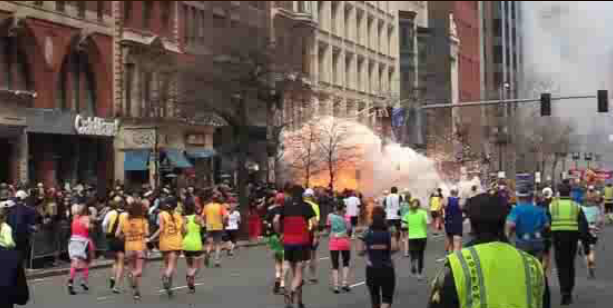 Additional evidence comes from Callie Benjamin, an employee of the restaurant, describing that people were blown onto the stairway inside, blocking her way downstairs. It seems impossible that an explosion at the barrier could have caused this, considering the crowd between the barrier and the restaurant.

"It sounded like a cannon or something," Benjamin said. "We didn't know what it was. An employee went to another window to see if something exploded and all of the sudden the second explosion went off and the windows shattered."

As customers began to panic, Benjamin yelled at them to stop running. She ushered them through the kitchen, down the back stairs and into an alley.

After that, she went to check on the main-floor dining room and patio. The explosion had blown people onto the main stairway, keeping her from getting there, but she saw the damage it caused. "There were a lot of people lying on the floor covered (in) glass and blood, a lot of glass and blood," Benjamin said.

After being blocked at the stairs, Benjamin saw her manager and an owner running down the back stairs. She asked what she could do to help and followed them to the basement.

The distance between Tsarnaev's position and the epicenter of the explosion may be small, only 3 to 5 meters, but it's sufficient to prove his innocence because it was certainly not his bag that caused the blast. Even FBI Special Agent In Charge Richard DesLauriers stated on April 16 (two days before he presented the suspects) that both of the pressure cookers were inside dark-colored bags or backpacks.

The video material shows clearly that Tsarnaev's knapsack was light-colored. On the April 18 press conference Special Agent DesLauriers didn't mention the shape or colour of the bags with one word.

Many people ask themselves why the video with Tsarnaev dropping his bag is not being published and are getting suspicious. Well, we have at least some descriptions what can be seen here, for instance by Massachussetts governor Deval Patrick:

Patrick describes how Tsarnaev took his backpack off, put it down and then moved away "in time". What Patrick doesn't say is that the backpack exploded - not to mention Tsarnaev's spunky carelessness, leaving the place just seconds before the bomb explodes.

Even the complaint doesn't claim that the video shows Tsarnaev's knapsack exploding. Instead, it seems to conclude ex negativo that this item caused the explosion because there's no other suspicious device visible: 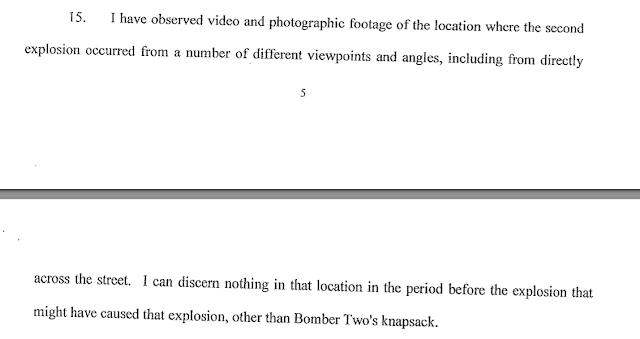 However, considering that a lot of spectators were standing on the sidewalk in front of the restaurant, and that the bomb might have been placed underneath a table or chair on the patio it is of no surprise that the explosive backpack is not visible.

Either way: the world needs to see the video from the opposite side of the street to judge whether it was Tsarnaev's knapsack that exploded or some other device. The fact that the video has not been published yet raises suspicion that authorities have something to hide.

It is evident that Dzhokhar Tsarnaev was misused as a scapegoat: whatever his knapsack contained, and whoever told him to place it in front of the restaurant - he was not the second bomber. A classical cover-up.

I do avoid any speculation about who was behind the attacks and undifferentiated "the government did it" theories. But Dzhokhar Tsarnaev certainly didn't do it.