Denise Richard and the woman with the sunglasses

Government Exhibit 1634b to be made public

Stephen Woolfenden is one of the most severely hit survivors of the second Marathon bomb blast. He was the last prosecution witness to deliver a victim impact statement. He testified that, while lying on the sidewalk with heavy injuries himself, he saw Denise Richard crouching over her dying son Martin:


“I heard ‘please’ and ‘Martin’ being uttered by Denise Richard,” said Woolfenden, who was lying on the pavement next to Martin and his mother after the second bomb exploded. “Just pleading with her son.” Salem News

At last exhibit 1634b, a clip of the Forum video, was shown to illustrate his testimony. Woolfenden was asked to identify Denise and Martin Richard in the clip, which he did. After that, the prosecution rested its case. The clip has not been published yet, but jury, judge, lawyers and all courtroom attendees had an occasion to watch it. Here are some quotes:

1634b is Forum video shows Denise rocking back and forth over Martin, dying on the sidewalk. WCVB News

The prosecution rested its case in federal court during the penalty phase of Tsarnaev’s trial after playing a video showing the mother of 8-year-old Martin Richard crouched over him and resting her head on his chest as he lay dying. Salem News

“Martin, please,” Denise pleaded, over and over. Forum’s video showed Martin’s arms raise up and flop back down. Woolfenden didn’t hear a response. Boston Magazine

No journalist bothered to report the exact location where Denise and Martin Richard have been at this moment. But it is possible to conclude it from the context of the messages and two stills from the video, government exhibits 21-43 and 21-44. They were taken about four minutes after the blast, which roughly matches the time when Woolfenden spotted the couple. Within the yellow circles, a woman with long dark hair who could be Denise Richard is seen on the sidewalk behind the Forum fence.


Her appearance and location match the "woman with the sunglasses" in the title picture. She's caring for a boy who might be Martin Richard, as I have argued here. He is not recognizable however because he is covered by the chairs and tables on the patio. There is no other person identifiable as Denise Richard in these video stills. But the title picture depicts the back of another woman with dark long hair who also theoretically might be Mrs. Richard - in the highlighted rectangle. 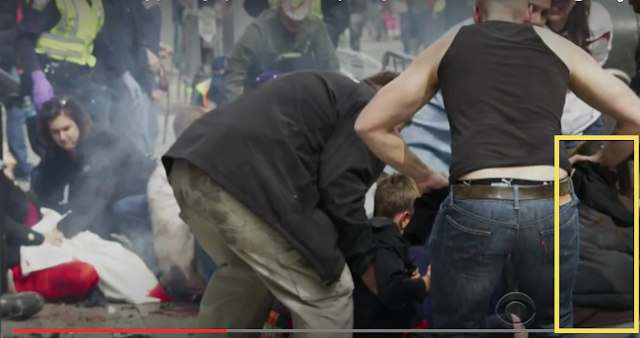 This woman is also visible in the next photograph (Kenshin Okubo), kneeing on the sidewalk beside the upright metal barrier: 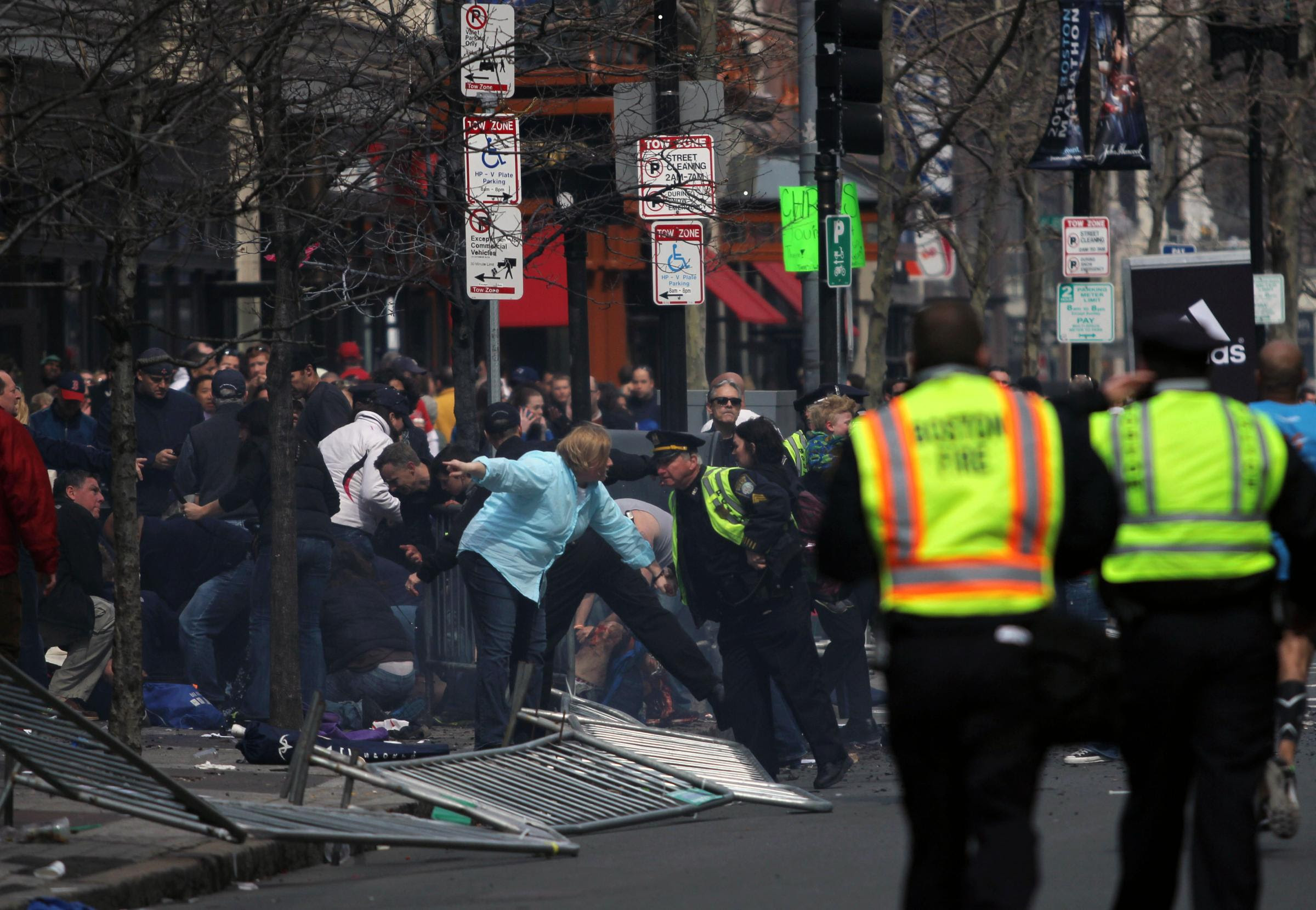 The woman at the barrier is a few feet further away from the Forum camera than the sunglasses woman and being covered by several people in between. As opposed to the boy who is sitting upright with his back to the patio fence, the unseen person being cared for by the woman at the barrier is lying flatly on the ground. It is impossible that the camera caught her resting her head on his chest as he lay dying, as one of the above quotes says. To put her head on his chest, she would have had to go down with her head so deep that the camera's view on her would have been blocked by other people with absolute certainty.

So there is a high probability that the woman in the Forum video who Stephen Woolfenden identified as Denise Richard was the sunglasses woman, and the remaining doubts will certainly be eliminated when the public gets access to exhibit 1634b at one time.

As I have pointed out in my last blog entry, there's one big problem with this narrative: the sunglasses woman is certainly not Denise Richard. The hair is similar, but her physiognomy is different. She wears sunglasses, not a brown cap as Denise Richard did. There's not the least sign on any of the available video and photographic footage that her right eye was hit by shrapnel. There is neither any blood in her face nor does her demeanor in any way indicate that she's so badly injured. She is in a condition to give help, not to need help.

Denise Richard had no opportunity to clarify this question because the prosecution didn't call her on the stand. This circumstance was used by the defense in a motion to strike the impact of Martin Richard as aggravating factor. Futile, of course.

And Bill Hoenk should be regarded as a whistleblower in the tradition of Sgt. Sean Murphy.