Correction:  my original statement below that the second photo is faked is wrong. I identified the corresponding video snapshot at 1:20. The man wearing a black shirt and light-colored trousers who just jumped over the toppled barrier is visible in the photo. Because of the perspective of the photo, it's impossible to see the toppled barriers on it. The man with the white cap is obviously covered by other people. 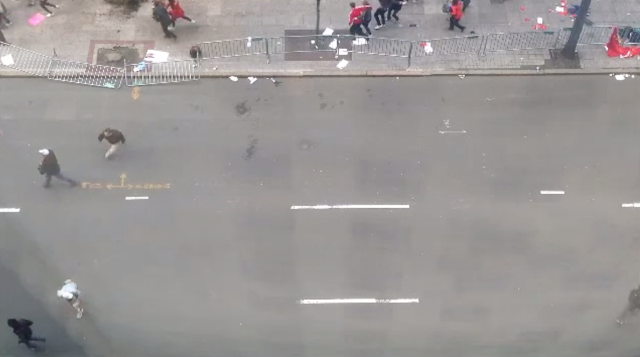 Fred Land has recorded a private video from the Mandarin Oriental Hotel which is situated diagonally opposite the Forum. The video shows a segment of Boylstron Street near the Forum from 1 minute prior to the second explosion until 7 minutes after.

This video has enjoyed virtually zero attention until now. This will certainly change because of its outstanding authenticity - a salute for Mr. Land on this occasion. It will not only help to establish a timeline for the aftermath of the second bomb, but also has the power to sort out fake photos which have continously contaminated the independent Boston Bombing investigations.

To illustrate the latter, I start with an example, with two photos I've already featured.

The two photos show Boylston Street seconds after the second blast from a similar perspective (Boylston Str./Fairfield Str. corner). On one photo, there is a mixed group with adults and children on the street, but it is not visible on the other - something that has kept bugging me. The Land Video delivers the solution. 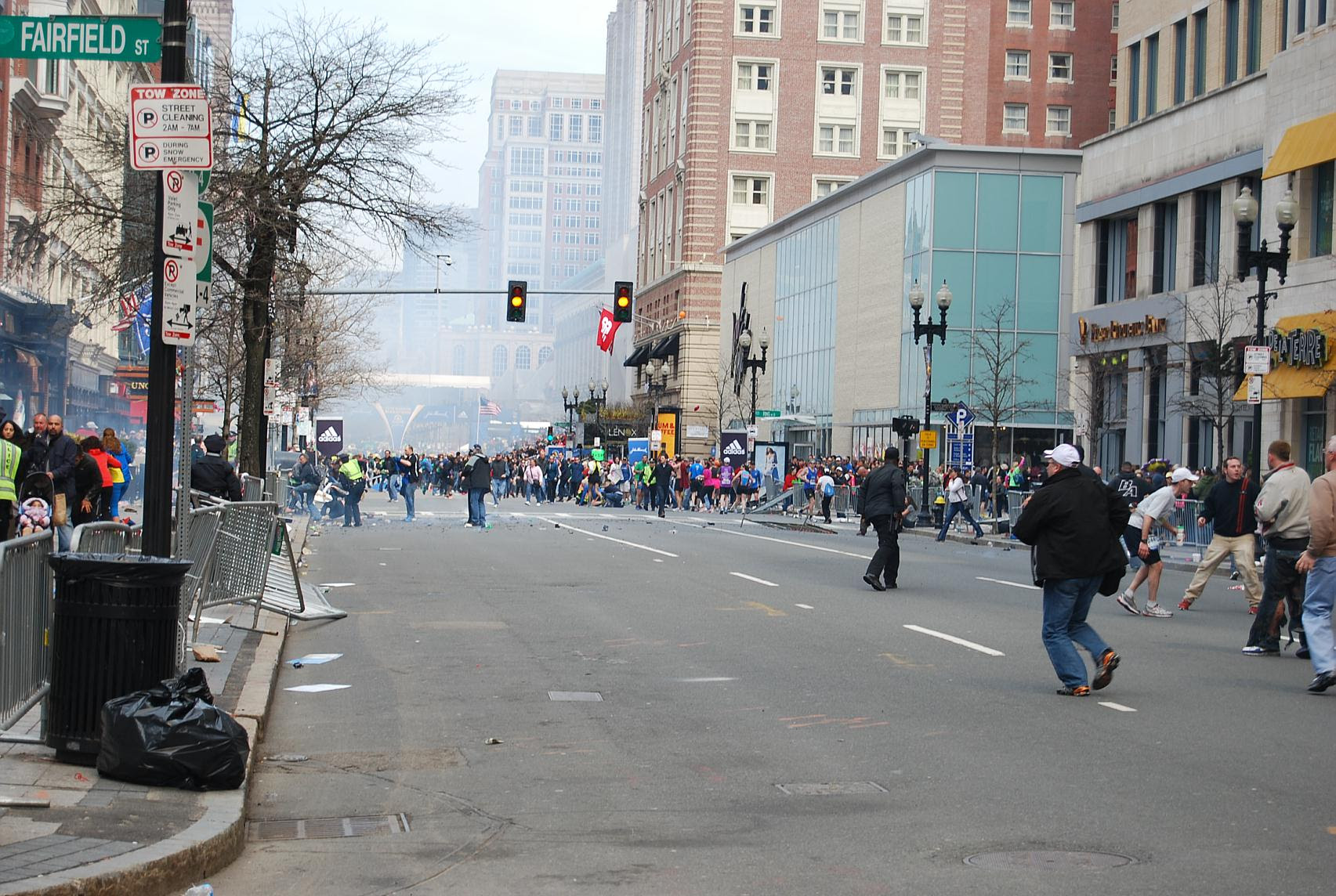 In this photo there are two barriers toppled down onto the street, a policeman nearby, a man pushing a baby buggy on the sidewalk (far left in the picture), a  man completely in black crossing the street (walking away from the viewer) and some guys far right in the picture. All of them appear also at 1:30 in the video, 30 seconds after the blast - even the baby buggy. The photo is genuine. Here's the corresponding snapshot from the video: 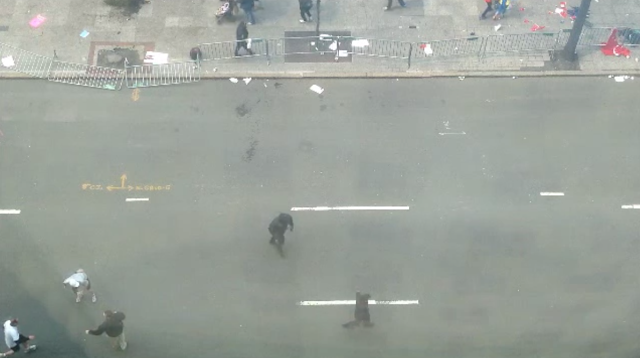 In the next photo you see some children in the middle of Boylston Street, hurrying away from the Forum. 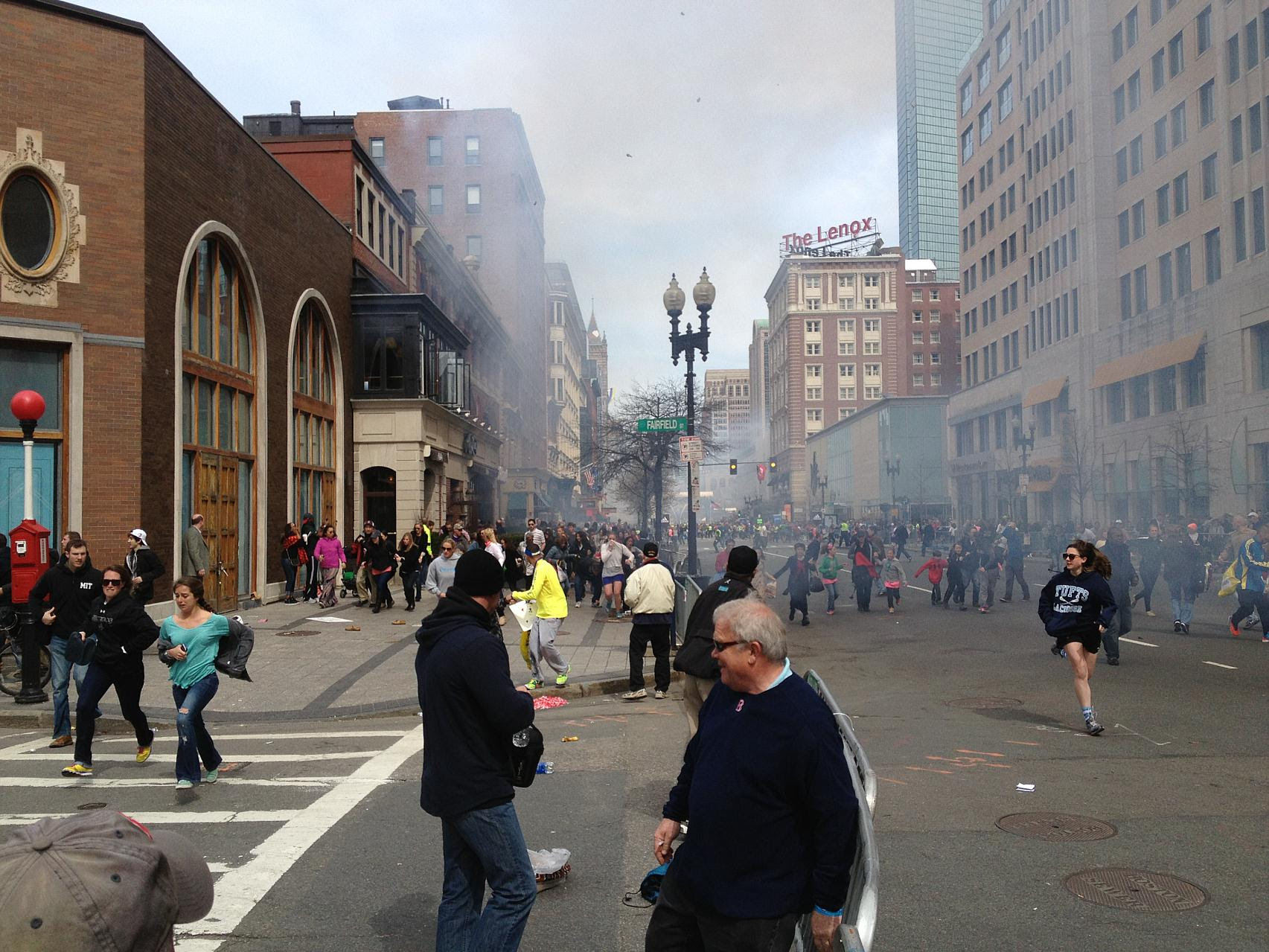 The second photo is fake. This scene never happened. A delicate by-product is that this photo was accepted by the FBI, widely spread and supposed to demonstrate that Dzhokhar Tsarnaev had just left the crime scene (he is visible at the far left). The photo is worthless.