Boston Bombing: the Story of Father and Son 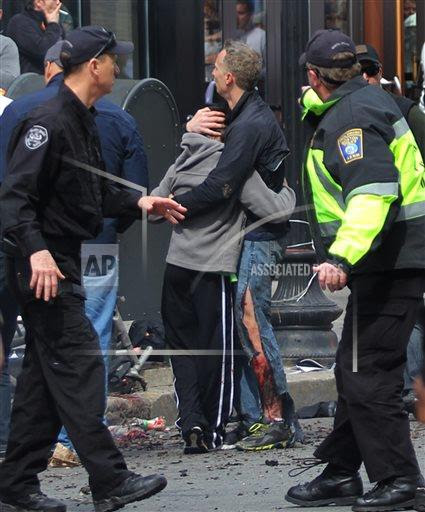 This photo shows a man and a boy, apparently father and son, near the Forum crime scene a few seconds or minutes after the explosion of the second bomb.

The couple is easily identifiable on many photos of the immediate aftermath of the second blast. It also shows up on a video with firefighter and first aider Matt Patterson. The father wears a black jacket, a blue jeans slit by shrapnel, sneakers with a salient color, and he's carrying a backpack. The son wears a grey hoodie and dark-colored tracksuit pants with white stripes, and sometimes a yellow shirt shows through under the hoodie. The father's legs are slightly bleeding, but he doesn't seem to be seriously injured.

The man and the boy are premium witnesses for clarifying the pending questions regarding the second bomb. There is much speculation about their identity, but I will avoid this aspect for now and discuss it after the timeline. For convenience I refer to them simply as Father and Son, with the caveat that this term might possibly not reflect their actual relation.

By matching the photos with the available videos, most notably the Fred Land video, it is in most cases possible to determine the time of their creation to the second. This allows for a meticulous reconstruction of the couple's activities, resulting in a timeline which is outlined below. In addition to the pictures I've already featured on this blog,  I'll refer to an extensive photographic collection of the website allthingsforum1.blogspot.com. Unfortunately, the website does not list the original URL of the photos, which doesn't enhance their traceability (and therefore authenticity). This is an important aspect because we do have to reckon with tampered or outright faked photos. So if possible, I will add the original URL to the photos. Fortunately, in most cases the Fred Land video serves as an unfallible tool to verify their authenticity.

There are three videos about the Forum blast which help determine the exact time of the photo shootings. It is possible to synchronize them:

-  The Fred Land video begins at 1:00 minutes prior to the blast.

To make the moves of the couple comprehensible, I've added a diagram to some of the photos. Father, Son and the child they care for are represented by a big red F, S, and C. Matt Patterson and Mike Chase, the first aiders whom they met, are represented by a black MP resp. MC. The barriers are numerated, and it is sketched if they are toppled; the trees are represented by green circles, the poles by black circles. Before the blast, the scene looks like this: 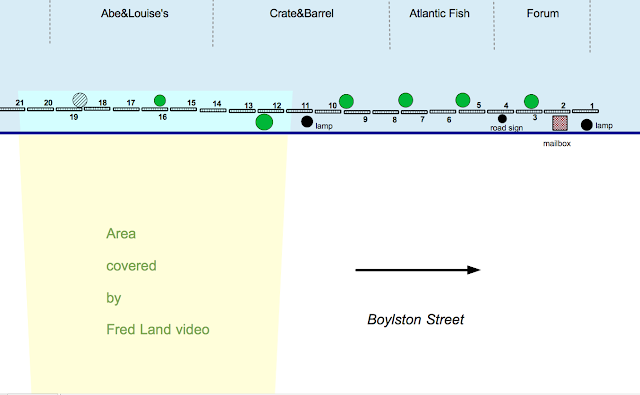 Timeline of Father and Son


The times indicate minutes:seconds after the second blast; adding 1 minute yields the time of the Fred Land video. If not stated otherwise, the times are exact up to 1 second.


0:07  Father is in the middle of Boylston Street, covering his ears (see here).

0:13  Father is about to erect barrier 4 which was hit by a crowd and toppled onto some people. Son is 3 meters left of him, the crowd in between. 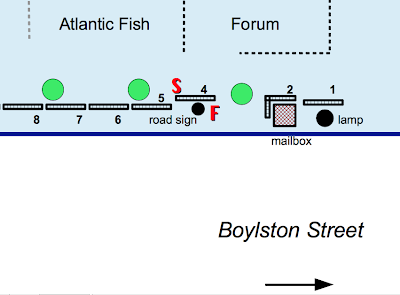 0:30  Father and Son are together, embracing each other. 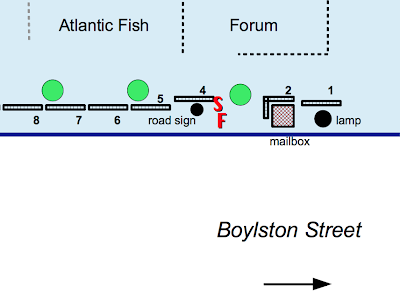 0:35  Father has a little child on his arm (in front of the tree, difficult to recognize). 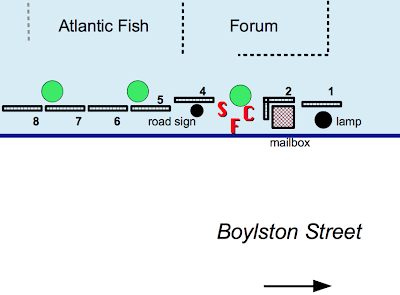 0:42  Father carries the heavily maimed child away from the Forum onto the street. Son is with him. 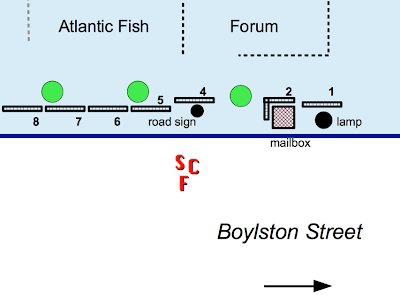 
0:58  Father is seen cowering or sitting on the street (in the background between the woman with the red trousers and the man left of hers).

1:02   Matt Patterson (red shirt) and three other men have arrived at the place where Father and Son have laid down the child onto the street, vis a vis the Atlantic Fish restaurant (leftmost). 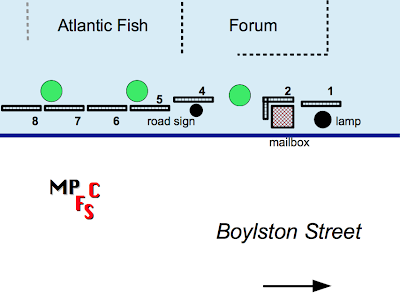 1:12  Matt Patterson has achieved a belt and begins to apply a tourniquet.


1:20  While the three other men quickly leave again, probably for organizing help, Matt Patterson gets a belt from someone on the sidewalk (at this moment barriers 5, 6, 7, 8, 9, 10 topple over) and makes a tourniquet for the child.  On the right side, Father is sitting on the ground. Son is covered by him.
1:38  The tourniquet is ready.  Mike Patterson, Father and Son stand up. Mike Chase (blue shirt) has joined the group. 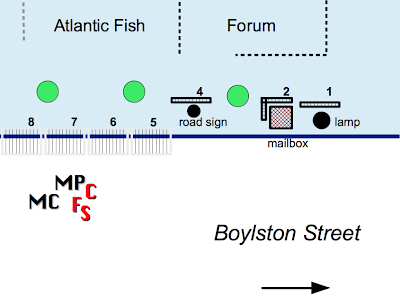 1:43 (+- 3 sec) Matt Patterson and Mike Chase carry the child away. Father and Son are visible rightmost in the photo,  turning their attention back to the Forum scene.
1:58  Mike Chase (blue shirt, black pants) is still on Boylston street, in the left half of the photo.  Father and Son are covered by the firefighter in the foreground.
2:00  Father and Son are standing together on Boylston Street, beside Mike Chase - now he's the one who is covered, but his bare legs are visible.
2:07  Father and Son are standing beside Matt Patterson, just right of the fire truck ("Ladder 17", who just arrives, turning into Boylston Street from Fairfield Street). It's obvious from the last three pictures that Patterson and Chase have handed off the child to other people.
2:26  Father and Son are leaning over barrier 4 and watch how first aiders treat injured people on the sidewalk in front of the Forum. The two photos seem to have been shot at the very same second. In the first photo leftmost the back of Father is visible. Both photos show the policeman carrying the little child away. 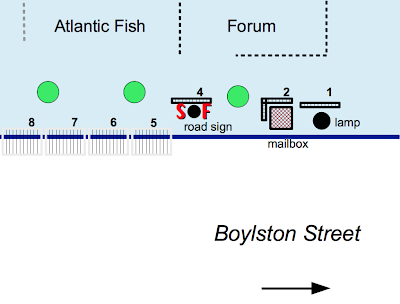 2:30   Father and Son still at barrier 4, but no longer lean over it.
2:35  From the same photographer, about 5 seconds later. Father and Son are gone and nowhere to be seen. Apparently they have exited the photographer's field of view on the left side.


4:21  Father and Son in the middle of Boylston Street with a law enforcement officer, in front of the fire truck. 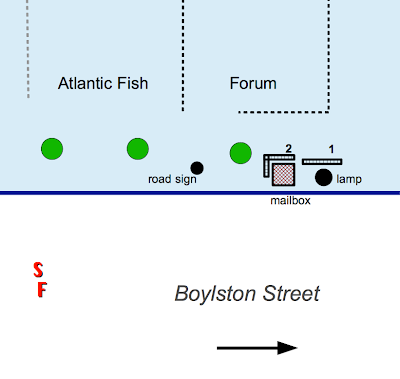 4:41  Firetruck "Ladder 15" just crosses the street from its first position to its final place just opposite the Forum. Father and Son are recognizable, arm in arm as always, just left of the firetruck and the man in the red jacket at the barrier. 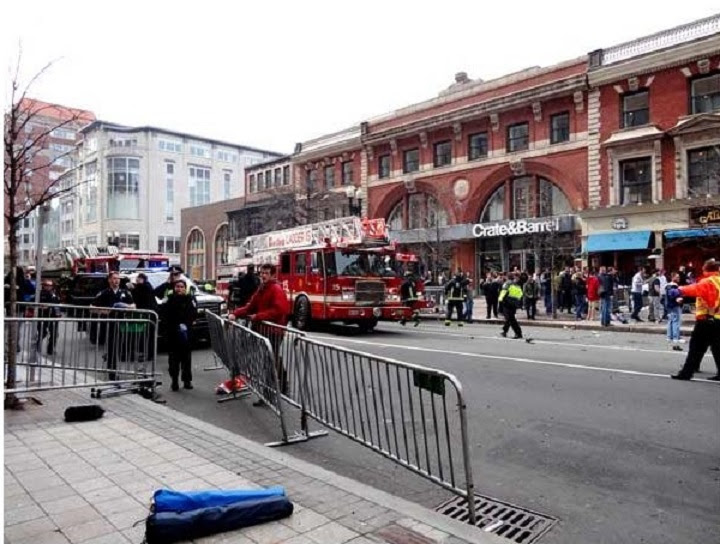 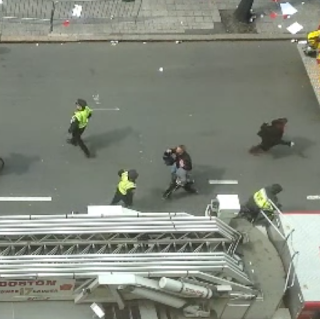 So much for the timeline of Father and Son. Now the question for their identity arises. Namely British newspapers fueled the speculation that they are Bill and Henry Richard, father and older brother of deceased Martin Richard. A Telegraph article from April 18th compares one of the last photos of Father and Son with the Richard family and equates their identities. The article is offline meanwhile, but I was able to catch a webpage referencing to it, including the headline and the photos.


Despite the striking similarity between Father and Bill Richard there are overwhelming arguments that they are not the same person, likewise Son and Henry Richard.

Here are two other photos of the Richard Family:

Both of the pictures show that Bill Richard is a tall man, distinctly bigger than Father. Just to the contrary, Henry looks smaller and younger than Son. Especially the difference of the body sizes of Father and Son on the one side and Bill and Henry Richard on the other side makes clear that they are different persons.

Additionally, while the faces of Father and Bill Richard look similar, Father's hair is completely different - it's curly and has a brighter color: 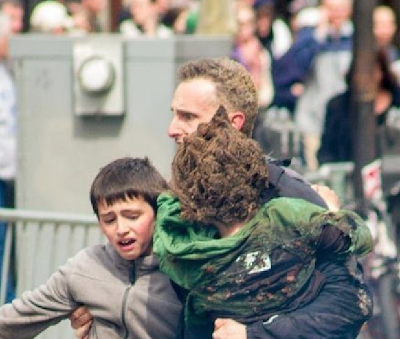 
Apart from the photos and videos, the behavior of Father and Son as sketched in the timeline is additional evidence that they are not identical to Bill and Henry Richard. Assumed they are identical: why are they not looking for Martin? Why are they not looking for mother Denise? Why do they leave the crime scene after five minutes without knowing what happened to them? This doesn't make sense.

It has also been suggested that the maimed little child was Jane Richard - despite early statements from Matt Patterson and Mike Chase that it was a boy. So assumed the child was Jane and Father and Son were Bill and Henry Richard - is it imaginable that they didn't attend her when she was being carried to the hospital? Certainly no. The only possible reason might be that they wanted to search for Martin and Denise - but, as already mentioned, they didn't do that.

I've argued here that the Richard family has not been at the Forum, and that Martin was not killed by the Forum bomb. The story of Father and Son definitely confirms that.