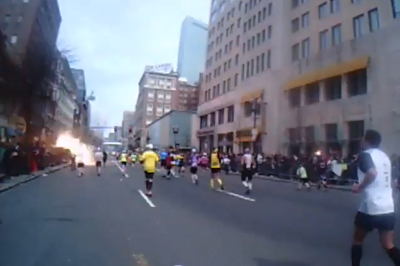 The surveillance video with Dzhokhar Tsarnaev dropping his backpack in front of the Forum restaurant is the only piece of evidence presented by the prosecution to justify the accusation that he planted the second bomb. The video has never been made public, it is known only to the FBI, the Boston and MA police, the prosecution attourneys, the Grand Jury, and, remarkably, the defense. Despite this secrecy, enough details have been leaked meanwhile to formulate ten well founded theses leading to the interesting conclusion that the video doesn't prove Tsarnaev's guilt, but his innocence.

Thesis 1:  The surveillance video allows a precise localisation of the place where Tsarnaev left his bag: at the metal barriers in front of the Forum restaurant, only 2 feet away from the curb.

Thesis 2:  It is impossible to precisely determine the epicenter of the explosion at the moment it happens on the video due to the flash, the dust and the concussion. This leaves plenty of room for the possibility that an explosive device in the vicinity of Tsarnaev's bag was the second bomb.

Thesis 3:  So the cogency of the surveillance video does not arise from a comprehensive snapshot proof that Tsarnaev's bag was the epicenter of the explosion, but only from his alleged suspicious behavior before.

Thesis 4: The pressure cooker bomb was placed in a dark-colored nylon backpack. This description doesn't match Tsarnaev's light-colored bag that he placed at the metal barriers.

Thesis 5: Video and photographic evidence of the aftermath of the second explosion shows that the epicenter was on the patio of the Forum restaurant. This is 12-15 feet away from Tsarnaev's bag.

Thesis 9:  So the defense is in a position to turn the prosecution's center piece of evidence – the surveillance video – into a powerful tool to prove Tsarnaev's innocence in the case of the Marathon bombing. A good opportunity is needed.

Thesis 10:  The prosecution is fully aware of this achilles heel, and this is the reason it tries to delay and prevent an open trial at all costs. The SAM restrictions and the death penalty threat seem to be perpetuated only to force Tsarnaev into a plea deal.

1  The criminal complaint from April 21th, formulated by FBI Special Agent David Genck, delivers a detailed description of Tsarnaev's whereabouts prior to the blast:

2  Nobody who has seen the video claims that it shows Tsarnaev's backpack exploding; all statements are elusive when it comes to this question.

which is a snapshot taken from this video:

3  Genck's lengthy description of Tsarnaev's phone call and his unusual "calm" behavior after the first blast are clearly intended to paint him as suspicious.

6  Witnesses for the patio being the epicenter:

Witnesses for the mailbox/metal barriers being the epicenter:

8  The defense has obtained a copy of the surveillance video in May already; it was the only evidence against Tsarnaev concerning the actual Marathon bombing. The prosecution has not provided any eyewitnesses or forensic evidence for this particular point.