Update 9/1/2015: I have to express my sincere apologies to Kevin Cullen for accusing him to report fallacious information about Bill Richard's statement.

The just published testimony of Bill Richard reveals that he first said that he picked up Jane by the mailbox, but - after having been shown a photograph (exhibit 24) by prosecutor Pellegrini - he corrected himself and said he picked up her at the tree. Bill Richard: And I previously said the "mailbox". I meant the tree. She was closer to the mailbox, but I do see Jane.

Most court reporters report the mailbox version, only Cullen reports the tree. None of them mentions that Bill Richard corrected himself.

I added excerpts of the original transcript in an appendix. Scroll down. 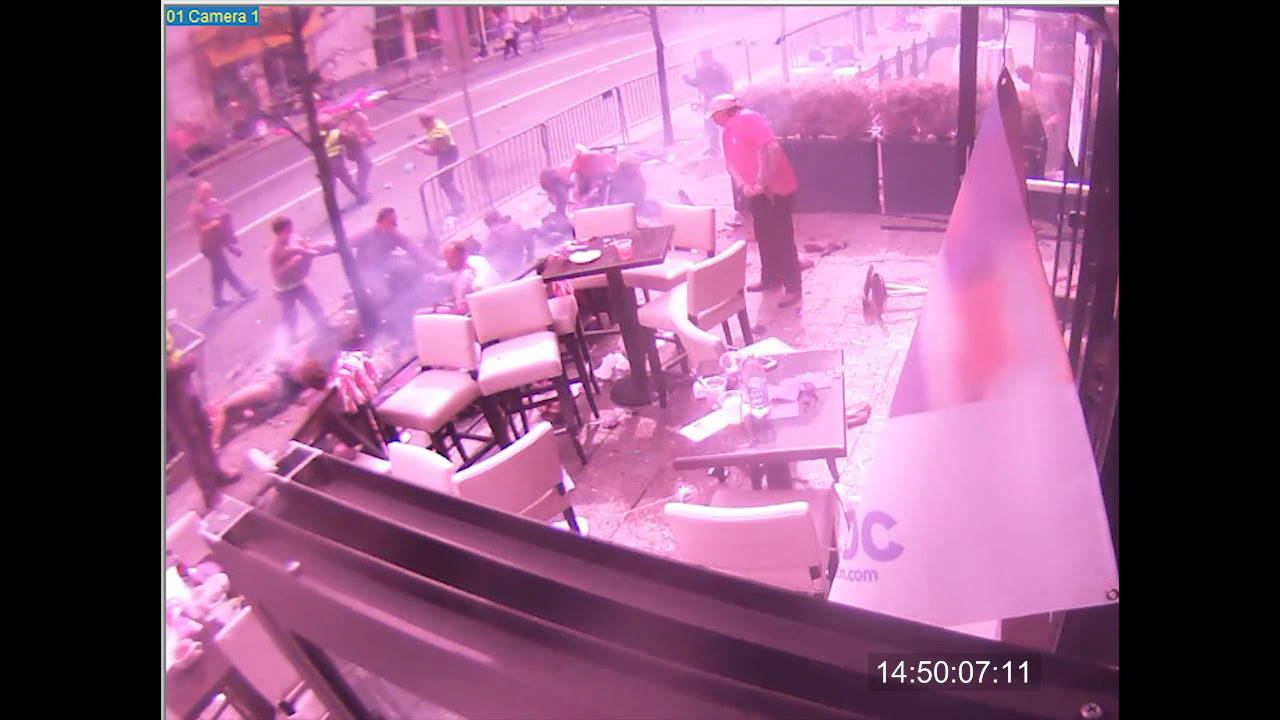 The Boston Globe's chief reporter in the Tsarnaev case, well-reputed journalist Kevin Cullen, has enjoyed many recommendations for his dense twitter covering of the trial. But on March 5th he made a serious and significant mistake, qualifying as a big blunder at best and a deliberate misreporting at worst.

On this Thursday, the second day of testimonies, Bill Richard, father of deceased 8-year-old boy Martin Richard, entered the witness stand and told the jury the sad story about how his family experienced the second bomb blast. He described how his son Henry pointed him to his heavily injured daughter Jane, and how he walked towards her, picked her up and carried her onto the street.

There's just one problem with these tweets: the location. Richard didn't testify that Jane was by the tree, at least not according to the majority of reporters. Most journalists don't mention the location at all, but some do, and with the exception of Cullen, they locate Jane by the mailbox. This is reported by WCVB's Kelley Tuthill, probably the most reliable source in the courtroom:

Here are the corresponding tweets from Alysha Palumbo and Gail Waterhouse:

Here's another article by Danika Fears:

That's 4:1 against Cullen, and court documents will certainly confirm the majority of observers. Yet Cullen went on to plant his fallacious "tree" version into a Globe article: 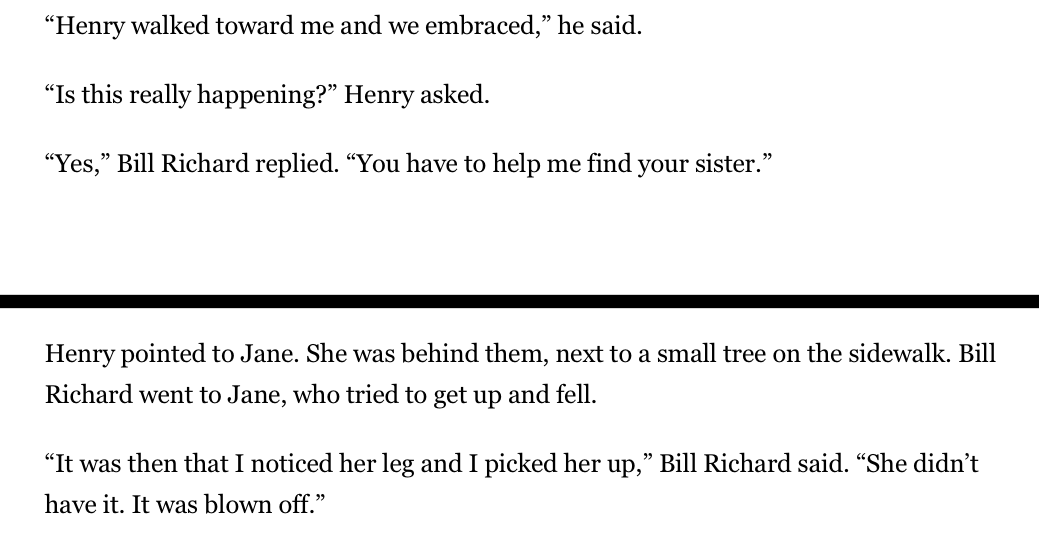 Pointing out the tree/mailbox discrepancy is not a quibble. The issue comes with a punchline. It is stunning that Cullen, despite blatantly misreporting this detail of the Richard testimony, actually seems to have reported factually correct: that Bill Richard picked up his daughter next to the tree - not "by the mailbox". In other words: Richard's memory seems to have betrayed him, and his wrong recollection was kind of adjusted by Cullen.

These three stills from the Forum video, just published by the Department of Justice as exhibits, show how a man - supposed to be Bill Richard - bends down to the ground near the tree and has a little child on his arm six seconds later - supposed to be Jane Richard.

The man does not walk towards the mailbox, and it wouldn't have made sense anyway, because there is no little child lying by the mailbox, as these photos, shot from a different perspective, show: 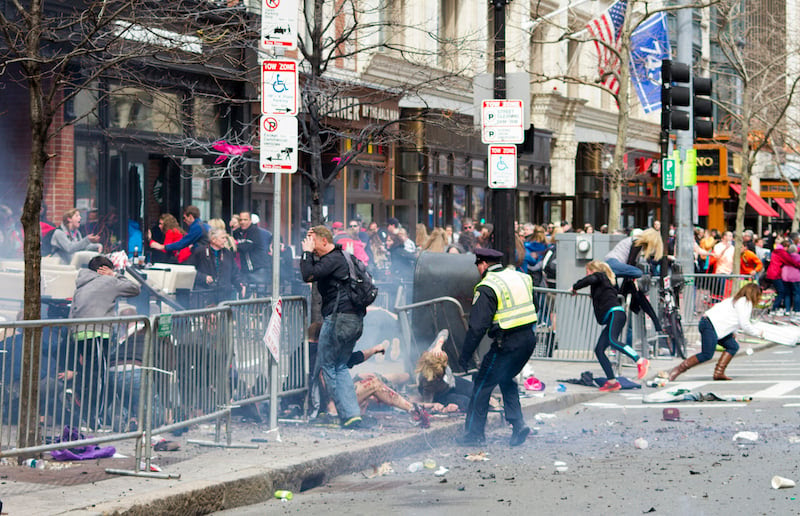 Appendix: pages 22 and 23 of the official transcript 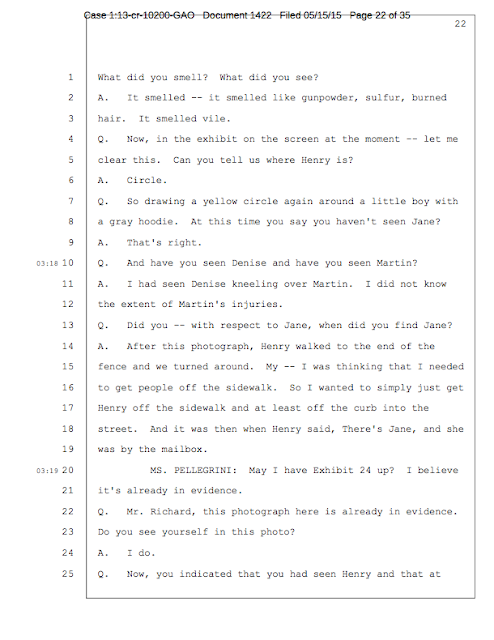 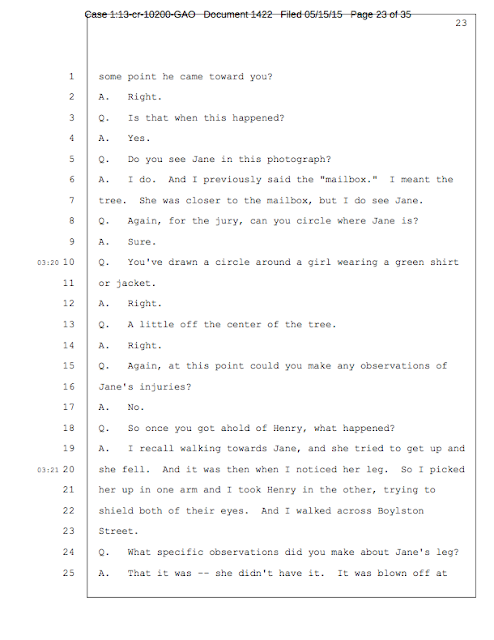